Forecasting PV market demand in European countries has at times been particularly challenging. Complications include demand being largely policy-driven, the lack of market caps, and downstream channels being adept in shifting high inventories rapidly to the end-market when motivated to do so. During the past two years however, means of forecasting end-market PV demand have improved considerably. The methodology can in fact be seen as an evolving process, and PV market demand in Greece can be used to explain these points.

Recently, the PV Association HELAPCO issued 2012 market statistics (912 megawatts) that align very closely with annual forecasts that Solarbuzz had made using our methodological approach in the October edition of the European PV Markets Quarterly report (956 MW). Enacted and yet pending regulatory impositionsof August 2012 appear to have ultimately influenced the 2H’12 market as anticipated.

Forecasting market demand requires both forward-looking methodology as well as “past casting:” comparing official data to market research. In addition, there is usually a lag between the time that an installation appears in official data and the date that the solar modules arrived on the site (the specific definition of PV ‘demand’).

The Greek official data generally remains stable, in contrast to some other country administrations that often modify past data over a period of 12 months or more afterwards. Therefore for Greece, it is important to extract the data from various sources, but also correctly evaluate the lag, prior to reaching the final end-market PV demand level.

Another valuable tool in forecasting market demand is to apply economic analysis of PV applications in terms of attractiveness indicators that allow growth drivers or constraints to be evaluated. Again, in the case of Greece, until recent regulatory impositions, the economic analysis has generally exhibited highly attractive PV propositions. And market forecasting has followed these indicators as a key market driver.

The figure below displays the economic indicators in the near-future for Greece regarding the case of installations <10 kW (largely residential). Recent (and earlier) impositions have reduced investment returns. The figure below does not include the (negative) impact of the 23 percent VAT applied in the residential case which drops the exhibited IRR by 4 points. 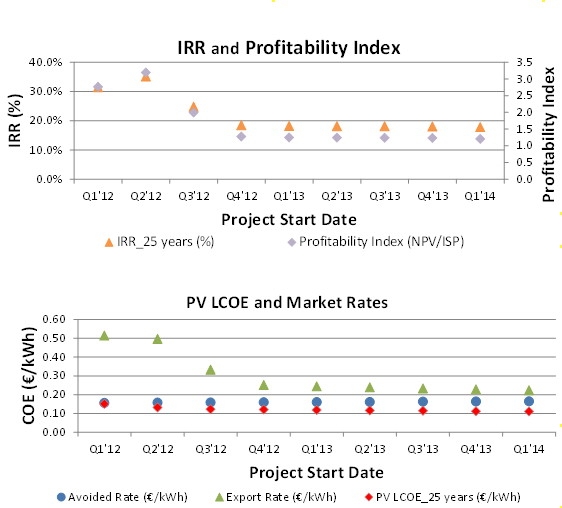 The result of diminishing returns as seen in the marketplace is that the <10 kW segment (largely residential) has become constrained. Even with the impositions that have caused the decline, the residential proposition is still viable (marginally). However residential consumers are providing less of a driving force.

Regarding PV LCOE versus electricity market rates shown above, the exhibited Export Rate is the diminished FIT incentive that is approaching retail market rates (Avoided Rate). At the same time, PV LCOE (25 years, 6 percent discount rate) has crossed over now and is lower than market rates. The net influence of these trends would begin to drive a market that allows onsite consumption benefit terms.

Today, the Greek market relies upon premium incentives (FIT) and does not include allowances for onsite consumption that would benefit consumers by avoiding purchase (and taxation) of increasingly expensive retail electricity. As it stands, Greece has committed to a modest quantity of expensive PV electricity but further (negative) retroactive impositions seem likely. Indeed, amidst domestic economic crisis and austerity measures, the search for additional tax revenues or cost reductions by the administrators will certainly continue.

This article was originally published on NPD Solarbuzz and was republished with permission.