The thin film materials that convert light into electricity with more flexibility than traditional solar panels represented one of the biggest New Energy success stories of the 21st century’s first decade. The potential was described as “disruptive.” The sector had a 96% compounded annual growth rate from 2002 to 2008.

There are now 170 companies in the sector and more than $2 billion in venture capital has been invested. First Solar, the leading company, was the darling of the stock market from 2006 to 2008. Backed by enormous marketplace attention, First Solar grew its production capacity from 25 megawatts in 2006 to 1.2 gigawatts at the end of 2009.

And then the supply of crystalline silicon caught up with the demand.

Thin Film 2010: Market Outlook to 2015, from Shyam Mehta of Greentech Media (GTM) Research, describes what is expected to happen in the field that has had so much sound and fury and yet has only produced 2 companies with a production capacity greater than 100 megawatts per year. ::continue:: 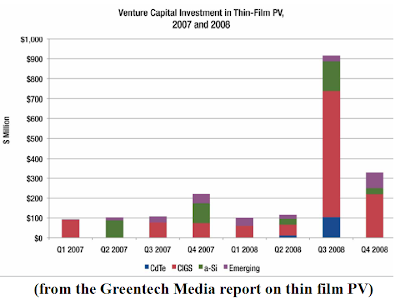 They seemed to offer a real and effective alternative in the middle years of the decade when there was a shortage of refined silicon. Competition for the limited supply drove the cost of crystalline silicon up and made standard PV panels more expensive. First Solar’s CdTe formula captured a progressively larger portion of the PV market.

But CIGS has failed to achieve commercial production. Refined silicon is once again highly available, thanks to Asia’s manufactories. Credit for promising but unproductive businesses started disappearing in late 2008 and has not returned.

The thin film sector now essentially belongs to First Solar. The GTM Research report recounts the fate of thin film in the last 2 years and predicts it will continue to struggle in the short term. But thin film will recapture growth in the 2011-to-2012 period, Mehta reports, especially with the most practical a-Si and CdTe formulas. And it will continue growing through the middle of the coming decade, by which time the so-far unrealized potential of CIGS thin film may be fulfilled. 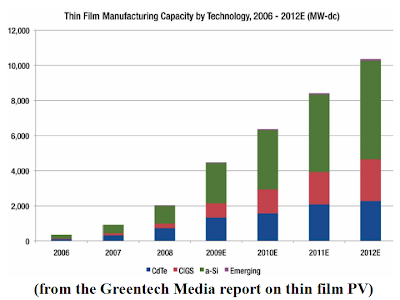