More
Home Solar What the U.S. and EU Countervailing Duty Investigations and Decisions Have In...

Note in Figure 1 that China was responsible for 46% of supply in 2011.  The technology shipped from China is primarily crystalline (c-Si).  Table 1 represents the shipment (supply history) of the photovoltaic industry from 1997 through 2011 by region.  Note that China’s share of shipments in 1997 was 1%. In 2007, China’s share of global shipments was 16%; 32% in 2009, and 46% in 2011.  The point is that China’s share of global shipments increased dramatically in a fairly short period of time. The country’s share of shipments was accomplished via a variety of methods that included government investment.  Any country could have accomplished the same results with committed and focused investment to its domestic photovoltaic technology manufacturing industry.

Table 1 presents regional shipment shares for photovoltaic technology from 1997 through 2011. 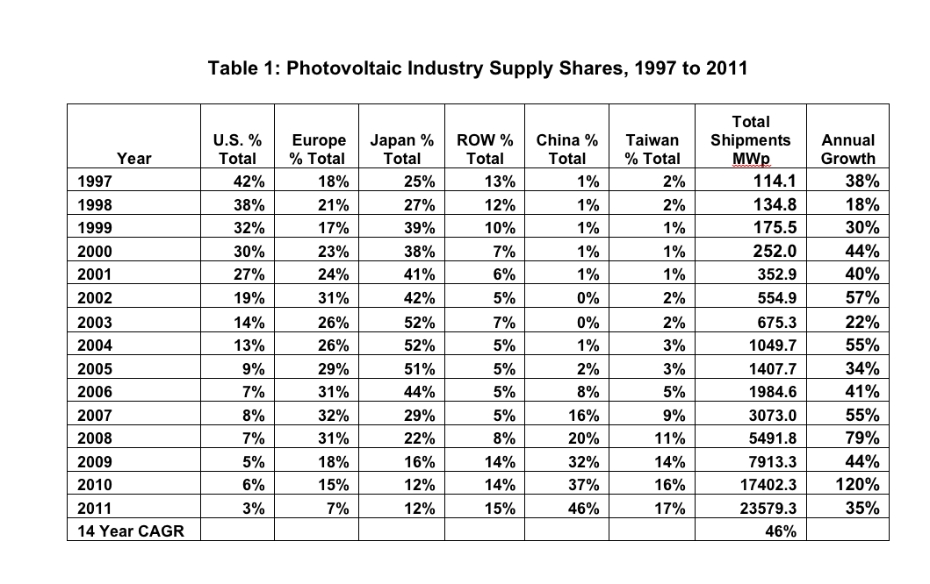 Omitted from Table 1 is the fact that glass, EVA (encapsulation), polysilicon and other materials are exported from the U.S. and Europe to China.  Basically, though China dominates global shipments of crystalline technologies, raw materials have typically been exported to China from the regions pursuing countervailing duty investigations or tariffs.

On the market side of the equation, governments typically choose to provide incentives to domestic markets under the theory that supply will follow – this is not always the case and has not been for solar.   Prices for solar have been decreasing significantly (far faster than costs) and, technology from China is less expensive than technology from other regions.  The reason for the difference in price is not that one region is doing it better than another it is that one region has better support. Globally, all solar manufacturers would embrace incentives that enabled innovation and populations globally would enjoy cleaner air.

Granted, the playing field in terms of manufacturing is not even – frankly, there are few truly even playing fields.  More can certainly be achieved by working together than by accusations and infighting.  In the U.S., which is in the midst of its 2012 presidential election, both political parties will use countervailing duty judgments to the betterment of none.

Globally, the photovoltaic industry has participated in the buying and selling of inexpensive PV products. Most, if not all, manufacturers participate in a degree of outsourcing and the demand side (installers, etc.) in all regions will (as will all buyers) always seek out the best price for a good or service.  The bottom line is that almost everyone in the market (both supply and demand) has been participants, even to the point of proclaiming that the very prices that are leading to losses and company failures are progress towards the goal of grid parity.  Briefly on the subject of grid parity, there are as many definitions for it as there are LCOE models.

The current countervailing duty investigations and judgments have made victims of the entire solar industry while also threatening to cut off manufacturers of glass, EVA and polysilicon (among other consumables and raw materials) from the largest global manufacturing region of PV crystalline technology – that is, a large customer base.  Certainly, there is no winner in this regard.  Given the potential in China for the installation side of the solar value chain, the current situation also puts at risk the ability of companies to compete for projects within China.  Finally, at this point vertically integrated manufacturers in China are in the best position to compete in the emerging markets of Latin America and countries in Africa.

It seems that, well, goodness gracious, can we not just get along?  It may be as simple as realizing that the photovoltaic industry, both supply and demand, is a global industry at virtually every point in the value chain.  There are also cultural aspects to the business cycle that should not be ignored.  Simply, different cultures have different ways of behaving in business and in life.  In the world of business, manufacturers locate near the market, near low cost manufacturing areas or where there are incentives to establish business operations.  Logically, when participants in a market take advantage of low prices for outsourced technology, low prices for purchased technology and incentives for supply or demand endeavors, they should not complain when things do not go their way.

The market for solar technologies (particularly for the grid-connected application) has always been tenuous and incentive driven – despite the bright spot of the FiT era.  All solar power competes with conventional energy and inexpensive coal and natural gas – conventional energy has, by far, the major share of the global energy pie.  For PV industry participants to line up against each other and fight over which country has the best manufacturing support is the same as being on the losing side of a game of Russian Roulette.