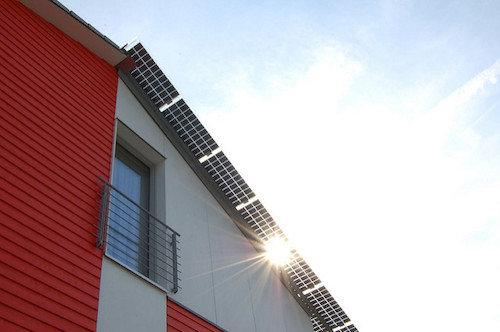 Vivint Solar Inc. added 61 MW of rooftop solar panels in the second quarter, narrowly beating its 60-MW target as the second-largest U.S. installer seeks to rebound from the failed acquisition by SunEdison Inc.

Installations were more than the 55 MW the Lehi, Utah-based company installed in the first quarter, according to a statement Monday. That reverses three straight quarterly declines. The shares gained 7.4 percent Monday, and then climbed another 3.1 percent to $3.30 at 6:18 p.m., after the close of regular trading in New York.

The company agreed to be acquired by SunEdison a year ago. The $1.9 billion takeover bid was never completed and Vivint canceled it in March, calling the process a “distraction” that hindered growth. Since then, the company has had two main goals: reviving installation and boosting financing. While Chief Executive Officer David Bywater said he was “encouraged” by the results, he’s seeking to accelerate the company’s performance.

“It will take some time before we get to a course and speed that I am proud of,” he said in a conference call Monday.

The company installed 66 MW in the second quarter of 2015. That fell while the SunEdison deal was pending to 61 MW in the third quarter, and 59 MW in the fourth.

Net income fell to $12.4 million, or 11 cents a share, in the second quarter, from $13.7 million, or 12 cents, a year earlier. Excluding one-time items, the loss of 49 cents was less than the expected loss of 56 cents, the average of five analysts’ estimates compiled by Bloomberg.

Vivint has been aggressive in its pursuit of outside funding, after pledging in March to raise “substantial” amounts of cash to finance growth. It announced Aug. 4 a five-year $313 million term loan to refinance an existing credit line and support a portfolio of 12 tax-equity funds that own more than 47,000 solar systems. In May it arranged $75 million in tax-equity financing and in March arranged $200 million in term loans.

“They’re hitting their targets,” Michael Morosi, an analyst at Avondale Partners LLC, said in an interview. “Their ability to fund ongoing operations could become problematic without a tax-equity deal in the very near-term.”