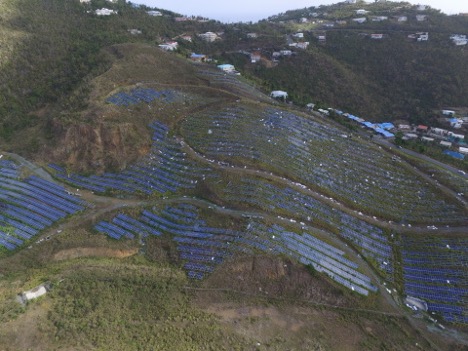 BMR Energy, a Virgin Group company and developer, owner, and operator of clean energy projects in the Caribbean and Latin America, announced today that it is starting construction of the 6.4-megawatt (MWp) Donoe Solar farm on St. Thomas.

The facility is expected to be completed and enter service in the fourth quarter of this year and will sell the power it generates to the Virgin Island Power and Water Authority (VIWAPA) under a newly negotiated 25-year Power Purchase Agreement.

“After Hurricane Irma destroyed the plant nearly four years ago, our team was eager to fully understand the failures of the prior design and installation and build it back stronger,” said Bruce Levy, CEO of BMR Energy. “We’ve considered design recommendations from experts throughout the industry and conducted wind tunnel tests on all systems and equipment. With this resilient design, the facility will be able to deliver reliable, clean energy to the local community for decades to come.”

The solar farm will be constructed on the site of a former solar facility that experienced significant damage during the 2017 hurricane season. BMR purchased site of the original solar farm in the summer of 2020 and said it will incorporate new features to increase its resiliency and the ability to withstand future windstorms on the new solar facility.

The Solar farm will include more than 14,000 photovoltaic modules and has been designed with strengthened racking, foundations and module connection systems to withstand wind speeds up to 180 mph.

“WAPA welcomes the opportunity to enter another partnership with BMR Energy as we endeavor to diversify our generation mix. While this agreement increases the volume of solar energy we capture for electrical generation, this and other renewable projects set WAPA on a path to lower operating costs and reduced reliance on fossil fuel. These reductions will ultimately translate to savings for our customers,” said Interim Executive Director / CEO Noel Hodge.

This will be the second project BMR Energy will operate to provide electricity for the utility.

The Virgin Islands Water and Power Authority is an autonomous agency of the Virgin Islands Government that produces and distributes electricity and drinking water to residential and commercial customers in the territory.