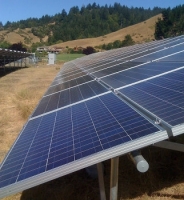 San Francisco, United States [RenewableEnergyWorld.com] The solar photovoltaic space is experiencing polysilicon prices that are at the lowest levels in close to a decade. At the same time, demand is soft because of both falling prices and a weak global economy. Meanwhile, manufacturing prices have remained relatively stable, causing what some refer to as a reactive market.

I caught up with a number players in PV at Intersolar North America last week to talk about the situation and find out how it’s leading to innovation and cost cutting measures as well as a new maturity within the solar PV supply chain.

Applied Solar’s president Charlie Gay said the market gives companies like an Applied an opportunity to work more closely with customers to create innovative approaches to manufacturing. Spire Corporation CEO Roger Little said he sees this as a perfect time to add manufacturing capacity in states desperate for both jobs and energy.

Borrego Solar CEO Mike Hall said his company is dealing with commercial, industrial and government buyers who won’t pull the trigger on a new purchase until prices have stopped falling.

Paula Mints from Navigant Consulting echoed that sentiment, explaining that the market is what drives prices, and unfortunately when demand is soft, those waiting to make a solar purchase are sure to hold out to make sure they get the best deal possible.

Both Mints and Hall recognized however that the situation is also forcing companies to be more flexible, which will serve the industry and the supply chain well in the long run.

Sixtron Advanced Materials’ VP Bates Marshall said that despite today’s low silane prices, companies are still recognizing the long term cost reduction that can come from using the much more stable polymers that are a part of the company’s Sun Box systems.

Abound Solar’s director of marketing Mark Chen said while commodity prices for Cadmium-Telluride (CdTe) have fallen, the drop hasn’t been as precipitous as in silicon.

Play the video below to hear more about what these companies are doing to bring down costs and innovate in today’s market.