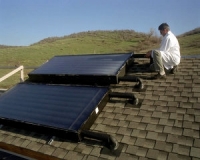 “In 2008, solar thermal heating and cooling solutions gained favour in more and more countries,” said Olivier Drücke, ESTIF’s president. “The solar thermal market in the EU and Switzerland grew by over 60% to 3.3 gigawatts-thermal (GWth) of new capacity, i.e. 4.76 milion m² of collector area.”

While demand for solar thermal technologies increased strongly in Spain, Italy and France, the biggest push came from the German market which more than doubled, from 0.7 GWth to 1.5 GWth.

To hear more about the industry’s prospects, play the video interview with Olivier Drücke below.