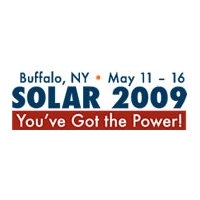 RenewableEnergyWorld.com shot video at the conference and trade show.  Click on the links below to watch the videos below.

Governor David Peterson addressed attendees as honorary chair of ASES Solar 2009.  He outlined his plans to help make the state of New York a leader in clean technology and renewable energy.

Graham Jesmer took a look at solar energy policy at the local, state and federal level. He had a chance to sit down with David Hill, chair of the ASES Policy Committee to talk about the policy recommendations report that his group authored. The report targets congressional staffers with bullet points on seven types of policies that are needed to move the U.S. toward a clean energy economy, including a renewable portfolio standard and carbon credit auctions.

David Griggs, director of business development for Buffalo Niagara Enterprise talked with Jesmer about his region’s potential as a manufacturing hub for solar PV technologies. Carol Murphy, executive director of the Alliance for Clean Energy New York (ACE NY) said that there is action taking place on the state level in New York and that the state may have a real energy strategy in the near future.

Jesmer also got a chance to speak with Steven Letendre, a professor at Green Mountain College in Vermont about solar energy’s potential as a fuel for small passenger vehicles.

In addition, John Giddings, part of National Semiconductor’s Global Business Development group for its SolarMagic product told Jesmer about the training the company put on at the show and gave him a rundown of the product.

Neal Lurie, Marketing and Communications Director spoke with Jennifer Runyon about the show and the overall excitement that attendees exuded during the 5-day event.  He also highlighted what’s in store for next year’s event.

Brad Collins, Executive Director of ASES clearly sees the industry — particularly the US industry — poised for huge growth.  “I think we will look back and say in 2009–2010, that was when the ownership of the leading deployment of renewable energy technologies moved from Europe (Spain or Germany) or Japan and came back to the United States and it’s never going to leave,” he said.

Financial consultant and REW.com contributor Peter Lynch talked on camera about solar stocks, the market in general as well as a large commercial PV system that he is installing.

And Chris Stimpson, Executive Campaigner for Solar Nation offered his perspective on the solar industry and explained how advocacy works to advance solar policy.

Solar industry veteran, Marlene Brown was honored with the Woman in Solar Award and sat down with Jennifer Runyon to explain her accomplishments as an engineer involved in solar and why it is important to encourage women to get involved in the industry.

Jigar Shah, the founder of SunEdison, gave the keynote address to open up the conference in which he talked about building respect for the solar industry. While solar is starting to grab the attention of utilities and the general public, there is still not enough respect for the technology, he said. Stephen Lacey caught up with Shah after his address and asked about why the industry isn’t getting the respect it deserves.

Workforce development was one of the most important topics at the ASES conference. There were numerous sessions dedicated to the subject. Lacey sat down with Jane Weissman, Executive Director of the Interstate Renewable Energy Council to talk about building the renewable energy industry’s credibility by properly training workers.

Building a qualified workforce is just the beginning. Making sure that workforce has the proper tools to exploit available resources is another important step. Ken Westrick, CEO of the resource evaluation company 3-TIER, stopped by the studio to chat with Lacey about managing weather and climate data to make the development process easier and less costly.

On the final day, Lacey hosted a solar thermal roundtable, which looked at solar hot water and space heating/cooling technologies and market trends. Check back with RenewableEnergyWorld.com tomorrow to watch that video.