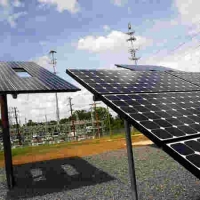 California, United States [RenewableEnergyWorld.com] In years past, solar photovoltaic (PV) installations were largely done in a piecemeal fashion, planned and implemented one rooftop or ground-mounted system at a time. But as solar technology has improved and as state governments demand more renewable generation through portfolio standards, large-scale projects are becoming more common. A growing number of utilities, rather than depend on independent power producers to build these projects, have launched multi-million dollar initiatives to own and operate their own solar assets.

Charlotte, N.C.,-based Duke Energy, one of the largest power companies in the United States and serving about 4 million customers, is one of them. In May, the utility received approval from the North Carolina Utilities Commission to proceed with a $50 million plan to install 10 megawatts worth of solar PV systems in the state, enough electricity to power 1,300 homes. The initial plan was double the size, but the North Carolina Utilities Commission Public Staff, which acts as a consumer advocate, asked for a reduction out of concern that the proposal was too aggressive and expensive.

Under the current plan, the solar systems, which will be owned and operated by the utility, will be installed starting later this year on the roofs and grounds of homes, schools, office buildings, warehouses, shopping malls and industrial plants. Between 100 and 400 separate arrays will be installed — the details are still being worked out — and they will range from about 2.5 kilowatts on residential rooftops to more than 1 megawatt (MW) on open land or on the rooftops of large commercial buildings. The power will be fed into the electrical grid and participants will be paid for use of their roofs or land, based on the size of the installation and amount of electricity generated at the site.

The main driver behind the project is North Carolina’s renewable portfolio standard, which requires the utility to satisfy 12.5 percent of its customers’ power needs with renewables or energy efficiency by 2021. The law requires that a growing portion of that renewable goal be met with solar energy, starting at 0.02 percent of the electricity sold by 2010 and rising to 0.2 percent by 2018.

But there are other reasons behind Duke’s decision to own and operate the facilities, according to Owen Smith, the utility’s managing director of renewable energy strategy. “We believe distributed generation will grow in prevalence as customers make these investments on their own,” Smith said. “We felt this was something we needed to get ahead of to understand the impact distributed generation would have on the grid.”

No single rooftop array on its own could disrupt Duke’s distribution network, but a large number concentrated in one area could lead to imbalances on a circuit, Smith said. By analyzing the data from the 10 MW project, the power company hopes to understand the limits of its electricity network and avoid potential problems. But distributed generation is also an opportunity for Duke, Smith said. With solar arrays strategically placed closer to the demand, the grid should become more robust, and the plan offers the power company a new way to interact with its customers, Smith said.

Duke isn’t the only utility to see opportunity in owning and operating its own solar assets. U.S. utilities have announced plans to build more than 800 MW of solar installations that they would own and operate, according to GTM analyst Daniel Englander. California utilities, in particular, have drafted ambitious plans. Southern California Edison has unveiled an $875 million proposal to build a network of 250 MW of PV power generation that would cover 65 million square feet of rooftops in southern California. And Pacific Gas & Electric has its own plan to build 250 MW of distributed PV installations, largely focused on ground-mounted systems.

“They are choosing to own and operate the projects because they view it as less risky than buying from a third party and because they believe they can build them at lower costs,” Englander said. Since utilities are regulated and have predictable revenue, they can raise financing at cheaper rates than most businesses. For multi-million dollar projects, cheap capital translates into significant cost savings.

Duke, which will finance its 10 MW project off its balance sheet, has set an average installation target price of $5 per watt. The company hasn’t yet announced module providers or installers, but Smith said the projects will involve silicon-based and thin-film technologies. The former will be used for residential projects and thin-film, which is cheaper but converts less sunlight to power per square foot, will go in the ground-mounted and larger commercial rooftop installations. All the systems will be fixed — no trackers will be used — and Duke has ruled out using concentrating technology like mirrors to focus a larger swath of sunlight onto a small area. But Smith said Duke is considering using several module providers so the company can evaluate the benefits of different technologies.

The more than 800 MW of solar power plants announced so far highlights the growing willingness of utilities to own and operate their own solar assets. But this amount is still a small fraction of the country’s planned power generation. U.S.-based plants totaling nearly 5 GW of electricity generating capacity were built or planned in the first four months of this year, according to the Energy Information Administration. Still, if Duke and others are successful with their plans, utilities now waiting on the sidelines should become more interested in launching their own, similar initiatives.

Justin Moresco has been writing about sustainability and green issues since 2005, first as a correspondent in West Africa for IRINnews. He now focuses mainly on emerging clean technology and is based in the San Francisco Bay Area. Before becoming a journalist, he was a licensed civil engineer.