More
Home Solar US Solar Manufacturing Rising on the Horizon

By the end of 2014, solar deployment is slated to be up nearly 40 percent over 2013. Today, the booming demand for solar energy supports more than 173,000 jobs and the U.S. has become the third largest solar market in the world. You can find solar energy atop your neighborhood big box store, powering a Las Vegas casino, in the middle of the desert, or on your own roof.

Three solar manufacturing companies that have received research and development funding from the Department’s SunShot Initiative have recently announced new factories or factory expansions in the U.S.  These include a new 200 megawatt plant that is up and running in Michigan and an expansion of an Oregon manufacturing facility, with plans to create 200 new jobs there. A third company just broke ground on a 1 gigawatt capacity factory in New York.  This manufacturer has found U.S. partners and market conditions favorable enough to aim for a U.S. plant that is two orders of magnitude larger than originally planned.

SunShot also supports companies that are manufacturing other solar system components like solar cell measurement tools and PV-ready electric meter collars in the U.S. These companies have leveraged SunShot’s support to develop innovative and advanced manufacturing processes from differentiated technology design to automation in order to establish a competitive advantage needed to make these new facilities a reality here at home.

As solar manufacturing begins to grow in the U.S., SunShot is committed to providing targeted, competitive research and development funding that moves products to market quickly while leveraging American ingenuity and innovation. To this end, today SunShot launched its SunShot Technology-to-Market funding opportunity, which aims to support entrepreneurs and small and large companies to develop solar technologies from prototype to scale-up with $45 million in available funding.

SunShot is supporting innovation in manufacturing to ensure U.S.-developed technologies can capture a larger portion of the global value in solar manufacturing, currently estimated to be about $120 billion worldwide, with a strong growth trajectory in coming years. This is an enormous economic opportunity for any country, and the Energy Department’s SunShot initiative will continue to empower U.S.-based manufacturers to embrace this opportunity.

And the manufacturing sector pays it forward — manufacturing-based industries contribute 70 percent of all research & development funding available throughout the U.S.

When we launched the SunShot Initiative in 2011, one of its 2020 goals was that the U.S. solar market could produce the equivalent capacity of solar energy products it consumes. We are now on track to reach that target, even as U.S. solar demand continues to climb. We are ready to power the nation and fight climate change with domestically-produced solar energy technologies. 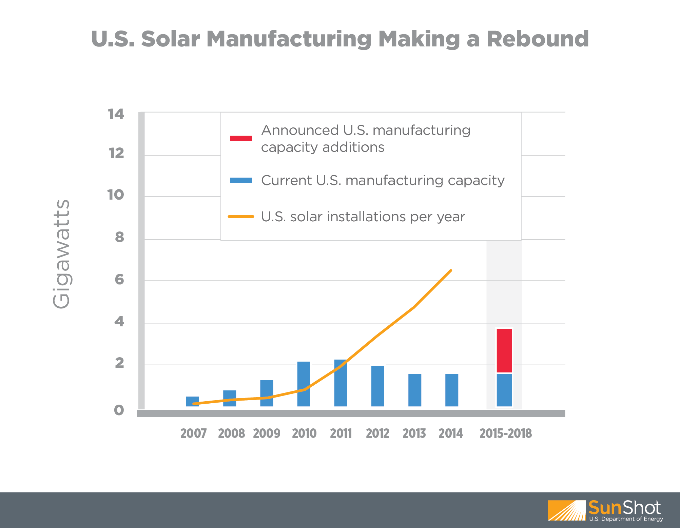