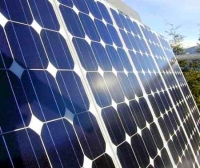 Los Angeles, California, USA – According to a few announcements that have been made at Solar Power International this week, while the broader economy struggles, the solar industry keeps right on growing.

The Solar Energy Industries Association (SEIA) along with GTM Research released a report that shows solar installations in 2010 are up more than 100% over 2009. The U.S. Solar Market Insight report compiled data for the first half of 2010 and shows significant growth in the U.S. solar industry despite the continuing malaise in the overall economy.

It appears very likely that when accounting for both solar electric and solar thermal installations, the industry could surpass the 1 GW mark for annual installations in 2010.  While a big number, Rhone Resch, President of SEIA announced yesterday that the industry’s goal is to be installing ten times that number annually in 5 years.  Resch said that installing 10GW annually by 2015 would create as many as 220,000 jobs.

The report’s baseline forecast projects that 944 megawatts of solar electric capacity (composed of 866 MW of PV and 79 MW of CSP) will be installed in the U.S. in 2010. This represents a growth of 114 percent over the 441 megawatts of solar electric capacity added in 2009. The report’s high forecast projects as much as 1.13 gigawatts being installed by year’s end, a 156 percent increase over 2009.

California led states for solar electric capacity installed in the first six months of 2010 with 12 megawatts, followed by New Jersey, Arizona and Florida. In total, 341 megawatts were installed in the first half of the year. The report projects a stronger second half for 2010 because of one large CSP project, a number of large PV projects and continued strength in the residential and non-residential markets.

All of those installations have led to job growth in the market as well.  As of August 2010, another just released report, the National Solar Jobs Census 2010 (PDF), identified more than 16,700 solar employment sites and 93,000 solar jobs in all 50 states.  Solar employers expect to increase the number of solar workers by 26 percent, representing nearly 24,000 net new jobs by August 2011. This rate is significantly higher than the expected three percent net job loss in fossil fuel power generation and the economy-wide expectation of two percent growth over the same period, according to the solar foundation.

“This important report demonstrates that the solar industry is a true area of growth for our economy – creating jobs across the country while helping to transition our nation to renewable sources of energy,” said BlueGreen Alliance Executive Director David Foster. “It is critical that we continue to pursue policies and investments that facilitate the continued growth of this industry and the continued development of a clean, renewable energy economy.”

Jennifer Runyon and Carrie Cullen Hitt sat down to discuss Jobs in the solar industry at Solar Power International.  Play the video below to see more: