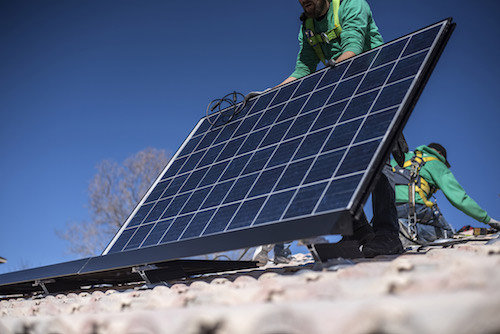 The U.S. residential solar market is projected to contract in 2017 after at least 16 straight years of growth, reflecting a shift in sales strategies by some major installers and increasing pressure from utilities to adjust incentives.

Installers will add 2,263 MW of residential systems this year, down about 2.4 percent from 2,319 MW in 2016, according to a report released Thursday from Bloomberg New Energy Finance. That follows gains of about 20 percent last year and almost 48 percent in 2015.

The contraction comes as companies including Tesla Inc.’s SolarCity unit and Vivint Solar Inc. see a growing number of customers opting to buy their rooftop systems instead of signing the no-money-down leases that have been a significant growth driver. Both are reporting slower installations this year. That transition “is happening faster than people had realized,” said Hugh Bromley, a New York-based analyst at BNEF.

“The residential market is undergoing a ‘retooling’ period,” Bromley said. “Sales are down across most major markets and fragmentation is occurring as the national vendors lift their foot off the gas pedal to focus on profitability.”

The decline is especially evident in California, the biggest U.S. solar market, where utilities are pushing for changes in so-called net-metering policies that require them to purchase electricity from consumers’ rooftop systems.

“California is becoming a tougher market to sell into as utilities switch to less generous net-metering regimes, and the ‘McMansion’ market for large residential systems shows early signs of saturation,” Bromley said.

The pivot also comes after a shift in tax policy that was aimed at spurring growth in the long term dragged down demand in the short term. Congress extended at the end of 2015 a federal incentive that had been due to expire at the end of last year. While the solar industry had lobbied for the extension, it also meant that consumers faced less urgency to sign up last year.

That drove installers to revise their sales pitches, to focus on savings over the long haul instead of racing to qualify for the credit, Bromley said. SolarCity has been shifting from the products that have been driving growth — leases and power-purchase agreements — as it also is integrated into Tesla following its November acquisition. Vivint, meanwhile, is retrenching after a failed takeover last year by the now-bankrupt clean-energy giant SunEdison Inc.

The only national vendor that saw increased market share in the first quarter was Sunrun Inc., according to the report. While growth is slowing, it’s now the largest independent U.S. rooftop company, and expects a 15 percent increase in installations this year. It continues to prioritize the leasing model, and “is best positioned of the large firms,” Bromley said.

“The market is far from dead,” he said. “It needs this time to right-size itself and refine the sales proposition, as it’s shifting from selling urgency to bill savings.”

BNEF forecasts the U.S. residential market to rebound by almost 22 percent in 2018, but there are some potential hurdles. The prospect of major tax reform may threaten solar financing, and an ongoing trade dispute over panel imports may drive up costs.

There are “additional headwinds that have not yet bore down on the residential solar industry,” Bromley said.