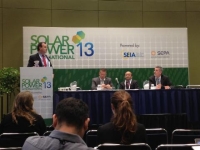 CHICAGO — The message rang out loud and clear: everyone in the U.S. solar industry, from manufacturers to stakeholders, need to get on the same page to figure out formal plans for end-of-life and take-back rules. And they need to figure out a process and plan starting now before it becomes a really pressing issue — or else regulators and governments will decide it for them.

“Recycling has to be part of what we do,” noted moderator John Smirnow, VP of trade and competitiveness for the Solar Energy Industry Association (SEIA), kicking off the Tuesday morning panel at Solar Power International (SPI). “For the solar industry to be truly sustainable, the whole supply chain has to be.”

The solar energy industry “has a great story to tell,” agreed Jim Larson, principal consultant and Clean Tech practice lead at EORM, “but we also have to deal with the backend of what we’re doing.”

The U.S. has roughly 10 GW cumulative installed capacity, nearly all of it in the past three years — why worry about end-of-life issues now? Larson showed projections of a tenfold surge in annual PV waste between 2014-2017 to 100,000 tons: “This issue is coming,” he warned. And not all modules are making it to their 20-25 year warranty levels, either, plus there’s other types of PV recycling such as manufacturing waste, damage in the field, etc.

The industry has three choices: be proactive with an industry-led program, stand back and wait for state legislations to put together their own programs, or find a middle ground with the industry and states working together to create a template for everyone. The longer the U.S. industry takes to formalize its own PV recycling/end-of-life plan, the higher the risk that they won’t be making decisions for themselves. The state of California already is mulling its own hazardous waste requirements that would apply to PV waste and a variety of materials.

There are lessons to be learned — and pitfalls avoided — by how related industries have dealt with end-of-life issues. Rich Vernam, group manager, corporate environmental department, Panasonic Corp North America, related how companies selling consumer electronics (TVs, monitors, other IT gear) have had to wrestle with this. Without a consistent industry-driven consensus, 25 individual states and Puerto Rico have created a patchwork of different regulations; as a result Panasonic has to juggle multiple reporting periods and dozens of different regulations and deadlines. “It’s been a “virtual compliance nightmare,” he said. Any federal effort to supersede states’ patchwork approach would be worse from Panasonic’s view because it would default to the most stringent state rules applicable.

By contrast, Vernam pointed out, the battery industry answered many states’ takeback mandates passed in the 1990s by coalescing a single national program, a unified collective effort that created a “one-stop compliance,” he noted.

First Solar has long had its own recycling program, which was explained by Sukhwant Raju, global director of recycling, operations, and services. A prefunded program was recently updated to be funded with project cash flows, which fits better with the company’s market sweetspot of utility-scale solar. The company has recycled around 48,000 metric tons to date, and does recycling in all its manufacturing plants, scalable to accommodate future high volumes. Roughly 95 percent of the semiconductor material in its modules is recovered, and 90 percent of the glass.

First Solar’s first recycling program (circa 2006) processed about 10 tons per day, and the latest one (circa 2011) increased to 30 tons per day, based on a more chemical-breakdown approach. Raju sees PV recycling costs going below hazardous waste disposal within two years, and in the next decade or so the company has plans to churn out 350 tons per day using smaller mobile facilities to do onsite recycling.

There is value in some of the reclaimed materials that can help offset the cost of recycling, the panelists noted; tellurium in First Solar panels, for example has good value, as does glass, and the copper and steel in the entire system have value. Raju added that their efforts continue to find an end-market for recyclable laminate materials. Having more valuable materials going in, such as gold, would help the recovery cost model, but they’d be more costly up front as well, panelists agreed.

SEIA’s Smirnow noted that SEIA has a working group that’s putting together a white paper on PV recycling, which will help to develop a policy recommendation for its board of directors. (He separately indicated results likely will be publicized sometime early in 2014.

All panelists agreed that a consortium approach, inspired by Europe’s PV Cycle program but modified for the unique U.S. market, perhaps with clear directions for residential vs. utility-scale solar. Raju offered that manufactures and customers have to be the first ones on board with the plan, with manufactures taking the lead and training customers to understand that they’ll play a key role, as well.