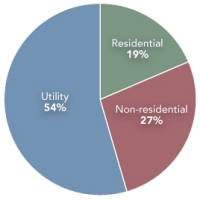 Rapidly declining prices over the past two months due to supply-chain adjustments are setting the stage for increased demand across multiple segments of solar PV in the US, and utilities are paving the way, says Solarbuzz.

August 10, 2011 – Rapidly declining prices over the past two months due to supply-chain adjustments are setting the stage for increased demand across multiple segments of solar PV in the US, and utilities are paving the way, calculates Solarbuzz in a new report.

Growth rates will “vary significantly” by market segment as all levels of government try to hash out various incentives and policies (federal, state, and local), but demand is picking up everywhere, from residential to corporate and government segments. Credit “explosive utility demand,” and end-user desire to get installs done before year-end expirations in federal grants, notes Solarbuzz president Craig Stevens.

Growth in the US solar market will double in 2011 — it’ll be third largest globally, trailing only Germany and Italy, and on track to increase from 5% of the global PV market to 12% by 2015. The US PV market has support at all government levels. The federal Investment Tax Credit (ITC) and Treasury Cash Grants are stimulating investments, while state policies such as the Renewable Portfolio Standards (RPS) push expansion among utilities, which increased from 17% of on-grid PV to 31% just in 2010.

California leads the way at the state level, but its dominance is fading, dropping to less than a third (30%) of the nation’s PV market in 2010, down from 50% the year before. California’s plans to increase its RPS to 33% will keep it on top, Solarbuzz notes. Among other top states the firm notes New Jersey, Arizona, and Colorado, but also some newcomers to the top ranks — Nevada is home to the country’s largest-to-date PV project, the 48MWW Copper Mountain project, and New Mexico has the second largest in the 30MW Cimarron Solar. Most top states incorporate drivers such as RPS and compliance methods (RFQs, rebate incentives, and REC financing) to influence market dynamics. Colorado, for example, has achieved some balance with REC purchase incentives for residential and nonresidential PVP systems, as well as utility RFQs for large systems. New Jersey, meanwhile, saw most business in its nonresidential PV segment due to prevalent SREC financing.

Utility-scale PV will become increasingly important in the US, says Solarbuzz, rising to nearly 60% of the on-grid PV market thanks to state RPS requiring certain levels of renewable energy used within their electricity source portfolios. In 2010, utility PV in the US started to outgrow downstream channels, so project developers with or without EPC capability started to take business from conventional PV integrators, notes Solarbuzz.

Beyond 2010, the project pipeline in the US looks bright. Instead of 2-3 utility systems installing >10MW in a single year (a typical pattern in recent years), last year there were 30 projects of ?10MW that either began or completed construction.