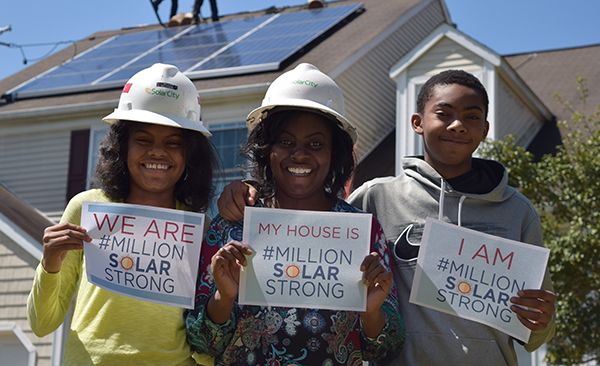 While the exact date that the U.S. installed its 1,000,000th solar installation is hard to pinpoint, according to the Solar Energy Industries Association (SEIA), the country is there. The organization plans to celebrate the milestone in early May with a three-pronged approach that includes political outreach, a large social media push and an event to take place in the near future.

“One thing we learned from the ITC battle was that we needed the support from all groups [across the political spectrum],” said Dan Whitten, VP of communications at SEIA. “In some ways this is a big thank you to all of the groups who helped us along the way,” he added.

According to SEIA it took 40 years to get to one million installations but it will take just two years to get to two million. That phenomenal growth deserves to be acknowledged in a big way. “We would like to have one tweet for every solar installation,” said Whitten. The hashtag will be #MillionSolarStrong, he said.

The celebration will mark the incredible growth that the solar industry has experienced as well as to show its importance to the energy sector.

“We are a major part of the energy picture and that is a very good thing for the United States,” said Whitten.