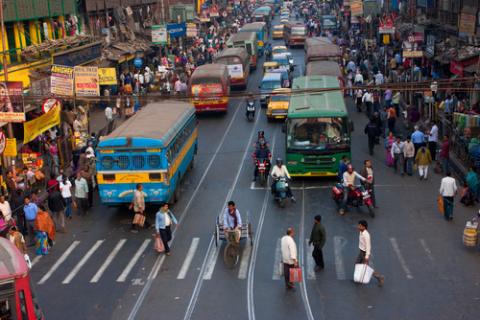 MUMBAI — India’s ambition to skip a generation of electricity technology starting with solar panels on telecommunications towers is being hampered by dust and urban sprawl.

Just 1 percent of the nation’s 400,000 mobile telephone masts are using photovoltaics with mixed results two years after a government directive ordered a switch away from diesel fuel. Congestion in cities, a rural insurgency and pollution make only a fraction of sites suitable.

“I’ve installed solar at 20 sites, and I’m not finding the benefit,” said Manoj Upadhyay, founder of ACME Group, which builds solar projects in India. “Our dust level is very high. You can’t afford to clean such small installations every day. And you’re always afraid that some neighbor might raise his building height by a few meters and cast a shadow.”

The findings by the consulting firm PricewaterhouseCoopers LLP and telecommunication companies such as Vodafone Group Plc and Bharti Airtel Ltd. show the limits of Prime Minister Narendra Modi’s goal of harnessing the sun to reduce $155 billion in annual crude and oil product imports. With a quarter of the population living out of reach of traditional power grids, Modi is depending on renewables to end India’s blackouts and close its power gaps.

The goal set out by the government in January 2012 was for three-quarters of telecom towers in rural areas and a third of them in cities to run on solar by 2020. Power Minister Piyush Goyal, who took office in May, has said his top priority is to deliver around-the-clock electricity to every customer.

“The potential and scope of renewables is huge,” Goyal told reporters in New Delhi. Better coordination between the coal, power and renewable industries is part of Modi’s “vision for ensuring energy security.”

The program for telecommunications towers is a small part of the government’s goal to produce 10 gigawatts of solar power by 2017. Already, the country has 2.8 gigawatts of the technology installed, enough for 6 million homes in the nation of 1.2 billion people. That makes India the world’s sixth- biggest market for photovoltaics.

Investors including Bessemer Venture Partners and the U.S. Overseas Private Investment Corp. have backed the tower conversion program. Yet owners of the towers, eager to cut the $2.4 billion they spend on diesel each year, say solar isn’t working as intended.

Solar “is not the best alternative” because not all towers have the space, the cloud-free days or the southward- facing orientation needed to capture enough sun, Bharti Airtel said in an e-mailed response to questions.

PwC estimated that solar is feasible at only about 8 percent of the nation’s towers, would cost 13.3 billion rupees ($222 million) to install and would still require diesel backup. To date, the telecom companies have installed solar panels at 4,000 of their sites, some of which still burn diesel as much as 20 hours a day, according to PwC and Vodafone.

There are other challenges too. Panel thefts remain an issue while a five-decade-old Maoist insurgency in West Bengal, Chhattisgarh, Bihar and Odisha states rules out installations in some of the most diesel-dependent areas, the consulting company said.

A better solution for telecom towers would be to install long-lasting lithium-ion batteries like those used in electric vehicles that could charge in a few hours and provide backup power when the grid is down, according to ACME, which manages energy usage at about a quarter of the nation’s towers. That would also be cheaper than using diesel or solar, he said. ACME will install Africa’s first lithium-ion storage system on a telecom tower by the end of the current quarter, it said.

Photovoltaic plants on telecom towers and in rural villages are part of a broader vision that renewable technology would allow India to avoid costly investments in laying more transmission lines from central power plants to consumers.

Instead of the old-style centralized system, photovoltaics would generate power closer to where it’s needed, a model known as “distributed generation” that’s turning into a commercial reality in the U.S. and Europe. If it worked in India, it could be replicated in other places where the grid is spotty, especially Africa and Southeast Asia.

“The basic aim of distributed generation is to generate power where it’s consumed, eliminating the need for extremely expensive grid infrastructure,” said Bharat Bhushan, a New Delhi-based solar analyst for Bloomberg New Energy Finance. “It does have the potential to cater to those without reliable grid power. But it can’t fully compete on all aspects of grid power. It’s more of a medium-term solution.”

Modi wants both the big plants and little ones. The government is working on expanding a program that Modi set up in his home state of Gujarat, where residents lease rooftops to private solar utilities. That rooftop model turned Germany into one of the world’s biggest solar markets.

Yet the experience of the telecommunications companies casts doubts on whether India can match Germany’s rooftop boom. Modi’s pledged solar revolution may need to concentrate on large, centralized PV plants feeding into the existing power grid.

“India is not like Europe,” Upadhyay said. He tried using solar panels on telecom towers and on his office roof and decided not to make further investments in smaller PV plants. “We have huge areas in the desert. We should just focus on building solar plants there to feed the entire country.”