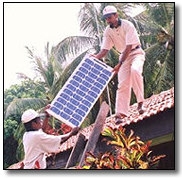 Bangalore, India & Paris, France – March 5, 2003 [SolarAccess.com] In the southern Indian state of Karnataka, Syndicate Bank and Canara Bank have begun offering new loans in which UNEP is buying down the financing cost of photovolatic (PV) solar home systems. In effect, Indian households will be able to purchase systems at an interest rate of approximately 5 percent compared to the normal consumer lending rates of 11-12 percent. The UNEP program is made possible with support from the United Nations Foundation (UNF) and Shell Foundation. “This initiative helps to meet both environmental and development objectives by overcoming a major barrier to increasing the use of Renewable Energy – access to finance,” says UNEP Executive Director Klaus Toepfer. Many Indian households still rely on inefficient and polluting energy sources such as kerosene. In Karnataka, even where grid electricity is available, problems of capacity shortages and inconsistent quality plague the power supply. This has led households to look to alternative power supply systems such as solar or diesel generators. Despite high initial costs, solar home systems emerge as an attractive option in the context of costly or unreliable alternatives and escalating grid power tariffs. Therefore, a growing number of households are turning to solar as a matter of necessity and convenience. But financing their high initial cost is a major barrier and one where southern India’s well-developed banking sector can play a leading role. The UNEP partnership will allow both banks to offer new loan products for the growing Renewable Energy sector through an extensive and established network of rural branches in the states of Karnataka and Kerala. By combining two banks and a number of UNEP-qualified solar home system vendors, UNF President Tim Wirth says the program is a “market-driven approach designed to stimulate competition among vendors and ensure quality products, competitive pricing and reliable after-sales service”. Shell Foundation’s President Kurt Hoffman says clean and reliable forms of energy “can improve access to education and communications, protect health and environmental values and promote economic growth – all necessary to alleviate poverty.” Hoffman added that such efforts would help create a future of economic, social and environment prosperity, which is the core of sustainable development.