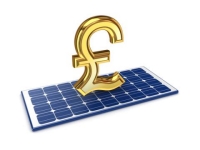 LONDON — After raising £130 million (€151 million) in an IPO, the UK’s first solar fund with institutional backing has begun trading on the London Stock Exchange.

The fund, Bluefield Solar Income Fund Ltd, focuses on large-scale agricultural and industrial solar assets. According to James Armstrong, a managing partner of investment advisor Bluefield Partners, the fund is backed by a broad range of investors, including some of the largest fund management groups globally and in the UK.

Historically, UK solar investment has been based in tax structures, private client funds and high net worth investors. “The entrance of institutions is very exciting for the market,” Armstrong told REW, “because it means that, for the first time, the market is accessing funds that are able to fund hundreds of millions, as opposed a few million here or there. (We’re part of that wave, but there has also been successful institutional money coming into the UK wind market as well.) And the fund could be viewed as a potential game-changer for the UK market because it is now viewed institutionally, and that’s always a good thing for markets which are looking to raise significant amounts of capital over the next few years,” he said.

“I wouldn’t second-guess the exact reasons why institutions have now come in,” Armstrong said, “but a very broad base of investors, and also significant and high-profile investment and management groups, have backed the fund. What they’re looking for, and what the fund can deliver, is a stable and attractive yield. As an asset class, solar is tremendously attractive in being able to deliver that.”

Armstrong attributed the fund’s success in raising money to both the UK government’s creation of a regulated market with government support — “an attractive environment to be investing in” and “a sensible and stable regulatory environment” — and the substantial growth predicted for solar in the country. The national market is still at a relatively early stage, with less than 1 GW of large-scale installations, but “clearly the expectation is that it should experience significant growth over the coming years,” he said.

“The other thing that’s very key,” he continued, “is that, in the UK, reliance on subsidies has been reduced by 75 percent since we began in 2010. So it’s a market which is also proving itself through efficiencies, cost-cutting and module price reductions and, year-on-year, it’s seeing less subsidy required.”

The most important change in the market, he said, has been the significant cost reductions seen in the solar industry. “Historically the solar market relied only on feed-in tariffs (FiTs), which are capped at 5 MW. Today, because of cost reductions, the industry is able to work under the Renewables Obligation (RO) scheme, which has no cap in terms of scale. Within a solar portfolio the average plant size is 10 MW — but we’ll see plants considerably bigger than that in future portfolios,” he predicted, adding that he expects to see significant growth in large-scale agricultural and commercial-industrial solar installations over the next 12 months.

“[The fund has] over £400 million (€464 million) in the pipeline that we’re reviewing with our contractors,” he said, adding that Bluefield is “looking at building up to £300-400 million in the next two to three years.” He expects the UK solar market to continue to grow. “Beyond that I have no forecasts; the only thing you can say is that, if it continues to drive efficiencies and reduce costs, solar will be the UK’s pre-eminent renewable energy source — it has to be.”