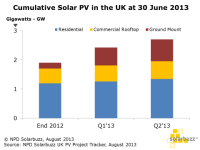 London, UK Installations of solar PV in the UK have slumped by almost half on a quarter by quarter basis in the immediate aftermath of the recent reforms to the Renewable Obligation Certificate (ROC) solar incentive scheme, which was enacted in April 2013.

According to the latest market research by NPD Solarbuzz, PV installations within the UK during April to June 2013 declined by 46 percent on the previous year’s quarter as the ground-mount segment was impacted by the cut in ROC funding.

During the first six months of 2013 there were 106 new ground-mounted PV installations with a capacity above 1 MW. Of these, 60 had an installed capacity of more than 5 MW and eight were above 10 MW.

At 34 MW, the UK’s largest installation to date, Lark Energy’s project at former RAF airbase Wymeswold Airfield in Leicestershire, was also completed during the analysis period.

The research notes that the UK’s PV demand during the first quarter of 2013 is confirmed at 520 MW whilst second quarter demand added a further 282 MW, bringing the first half to more than 800 MW. SolarBuzz states that the nation’s year-to-date demand has reached the GW level for the first time, confirming the UK as GW-status end-market  territory.

Overall, the analysis indicates that England’s southern regions dominated large-scale solar PV parks during the first half of the year, with 67 percent of the total large-scale capacity installed. The mid-eastern regions of the East Midlands and East of England accounted for 27 percent, with the remainder spread across the rest of England and Wales.

The largest ground-mounted PV installation in Scotland was completed during the first quarter of 2013 at the former Jewel & EskCollege in Dalkeith.

There is currently in excess of 1.5 GW of ground-mount solar parks in the UK that have gone through successful project planning application stages and are awaiting build-out or final financing go-ahead. Cumulative solar PV installed at the end of June 2013 stands at 2.71 GW, with half residential, 22 percent from non-residential rooftop installations, and the remaining 28 percent from ground-mounted PV.

Commenting on the analysis, Finlay Colville, NPD Solarbuzz VP, said: “The slowdown in the ground-mounted segment in the second quarter was also affected by the availability of Chinese modules coming into Europe, prior to the European Commission ruling at the start of August. The strength of the ground-mount pipeline however will ensure that the UK retains a health top-10 market ranking for 2013 and beyond.”