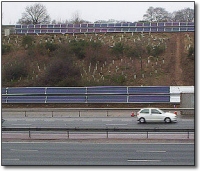 Albeit in a small way, some British motorways are set to power the country as this month sees the installation of the UK’s first solar motorway sound barrier on the M27 near Portsmouth.

London, England – March 15, 2004 [SolarAccess.com] The 11 kWp, 50 meter long system, installed by Solarcentury for the Highways Agency, will generate around 9,500 kWh of electricity each year from previously useless space that happens to have good solar resources and nearby electrical lines. The power generated by the sound barrier will be fed into the local electricity grid and used locally for street lighting, street signage or simply sold back to the electricity suppliers. This system is equivalent to roughly five domestic solar PV systems; one house worth of solar power could be installed for every 10 meters of motorway in the UK, said the company. “One system uses standard modules and the is other based on unique “peel and stick” solar technology which is simply bonded to the aluminum sound barrier, both suited to a wide range of construction applications,” said Dan Davies, director of engineering, solarcentury. This amorphous silicon technology, more commonly known as ‘thin film’ was chosen by solarcentury for use in this demanding environment since the units contain no glass and are robust enough to withstand impacts from stones, stray beer cans and other motorway debris. “The solar panel trial is the only one of its kind in England, and could revolutionize the way we power our motorway ‘furniture'”, said Les Hawker, Highways Agency Project Manager for the scheme. “The fences are easy on the eye; they will also help us to test safety issues and see how they affect motorists.” Thin film has gained a good deal of support thanks to its flexible attributes which allow it to be used in many applications, including the growing BIPV (building-integrated PV) market. Solarcentury sees the highway application of thin film as an extension of BIPV applications where solar is integrated into existing structures. “Recent developments in solar photovoltaics have focused on integrating solar into buildings. This pioneering project demonstrates the possibility of using the otherwise un-used verges of our motorways to generate clean electricity,” said Jeremy Leggett, solarcentury CEO. Solarcentury has already installed hundreds of solar lighting systems in bus shelter and stops across the country and are currently testing the use of solar powered bus ticket machines on Waterloo Bridge in London.