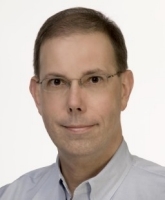 Washington, DC, United States [RenewableEnergyWorld.com] We raced through the final version of The American Recovery and Reinvestment Act of 2009 (ARRA) hoping for dramatic changes that will accelerate the solar electric market and create jobs in the U.S. near term. And while there are certainly a number of provisions that will get the industry back on track, we are left wondering what the real impact will be. Here’s our first take.

For business, the attractiveness of the 30% ITC incentive, passed in the October 2008 stimulus package, has changed radically as profit expectations have moved downward over the past few months. Without profits, tax credits are irrelevant. ARRA creates a new 30% Renewable Energy Grant program, which is like a rebate, to be administered by the Department of Treasury. The expectation is that the grant, which can be taken by any for-profit business, will help restart and expand the market.

ARRA directs the Treasury to make grant payments within 60 days of application. We expect it will take the Treasury two or three months to implement the program and that applicants will need to establish a placed-in-service date, provide a utility interconnection agreement and prove that the system is producing power. All the federal and state tax provisions that require us to have the system interconnected by year end remain in place, so we expect, as in years past, to see a rush at the end of 2009. The placed-in-service date and the receipt of the grant payment may or may not be in the same tax year. This could create some issues for some system owners, but does not seem like an insurmountable issue. In 2010, an efficiently run grant program could change scheduling, smooth seasonality, improve cash flow and ease the pressure to complete projects in December.

ARRA grants will not be included in the federal gross income of the taxable entity, but it is unclear whether the federal grant will be treated as taxable income in the states. All of us should be working to understand the facts in our state as this will potentially have an unintended negative impact on system cost and payback. Businesses may be able  to recognize the federal grant as capital and lessen any immediate state tax impact if they do not use the grant proceeds for current business activities.

A benefit provided by the stimulus package is the ability for system owners to receive the full federal grant even if they receive a state rebate or other preferred treatment like below market loans or tax preferred bonds.

The chart below shows a comparison of a 50-kW system in California — a state with a solar rebate program — versus a state with no solar rebate program. We are assuming in this calculation that the federal grant is taxed by the state. The combinations of federal ITC, federal grants, state incentives and state income tax creates various outcomes for potential system purchasers. California, whose ten year, 3,000-MW CSI program has completed about 100 MW in its first two years, will receive little new benefit from the ARRA and in our view will not significantly accelerate the non-residential CSI program.  Overall we think that in most states the 30% grant will be of less value than the 30% ITC. 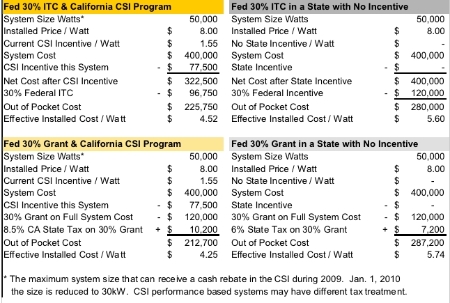 More study is needed to understand the interplay between the grant and the basis for depreciation, but it appears only 85% of the cost of a project that receives a grant can be depreciated. Lessors who receive the grant should be able to depreciate 100% of the project cost, but will have to report one half of the grant as income over the period the project is depreciated.

Traditional system owners will still need to have substantial tax liability, usually created by making a profit, to utilize the full benefit of depreciation and create reasonable payback.

Power Purchase Agreement providers (PPA) may find the grant unfavorable for their current business structure. The consumption of tax liability and depreciation is critical to creating the correct investor returns, so these businesses will still need finance partners. PPA providers have tended to share the deprecation benefit with their tax equity partners, but may now need to find investors that can specifically consume depreciation.  This could cause an evolution in the PPA space, but we are sure that these new hybrid structures can be developed.

On their own, and given current electricity prices and current solar technology cost, the federal 30% ITC, or the new 30% federal grant will not generate a reasonable payback for a system owner. They create the base of a pyramid that should encourage states, cities, towns, utilities and others to offer incentives to encourage their markets. The stimulus package allocates US $3.1 billion of funds to the states through the DOE. We think this will encourage some states to expand or start solar programs.

Aother major hurdle caused by the financial crisis has been the lack of short- and long-term project funds. It’s likely that system owners will continue to finance the bulk of their purchase. Considering the 30% grant, it seems reasonable that this could be around 70% of the system cost.  We hope the new $6 billion Renewable Energy Loan Guarantee Program, which has no solar carve out, but may support $60 billion in loans for all renewables, will be easily accessible and provide a path for solar system owners to secure funding for projects. We will likely have to wait until summer to know the terms and conditions of this program.

We think the grant and loan guarantee program will get a lot of attention throughout the U.S. and that many businesses will explore their options. This will potentially begin to expand the market, perhaps first for smaller, lower-cost commercial systems. Many will delay their decision until they have complete clarity about the new programs. The ARRA programs do not improve system payback in a material way and companies are unlikely to change their return on investment requirements. Based on current economic conditions, it’s unclear to us if even willing solar customers will allocate the financial resources for this optional investment.

ARRA provides many billions of dollars to be managed by the General Services Administration (GSA), Department of Energy, the military, Bureau of Land Management and other departments to repair, maintain, improve and expand government facilities, undertake energy efficiency and renewable energy projects, provide clean energy bonds and workforce training. Our read is that there are no specific solar carve outs, but also no specific solar limits. It is difficult at this time to project the full impact on the solar industry. We expect all industries will be competing to provide construction, products and services to the government, or in the case of energy technology companies, receive funding for R&D or manufacturing projects. There is little doubt that solar systems will be included in many projects.

GSA owns and leases over 354 million square feet of space in 8,600 buildings in more than 2,200 communities nationwide. In addition to these office buildings, GSA properties include: land ports of entry, courthouses, laboratories and data processing centers.  They also manage about 34,000 post office facilities.

Space will not be an issue for those who wish to provide solar systems to the federal government. Winning project funds for solar projects, moving through the mind-numbing permitting and application processes and dealing with the very long project cycles that are a standard part of doing business with government will be.

We can easily identify more than $10 billion that are to be used in part to improve federal facilities and supporting generating projects directed to solar and other renewables. If 10% is allocated to solar ($1 billion) we might see on the order of 125 MW of installed projects over the coming years. It is unlikely that federal solar installations will be eligible for any incentives, so these may be the most expensive systems deployed.

There is also federal funding for schools to be managed by the states. A portion of about $975 million is to be used to renovate facilities and meet green building standards, with another portion that will probably be directed to solar. Supposing it’s around 10%, the $98 million will go into solar projects, meaning that 12 to 15 MW could be installed on schools.

Separate from ARRA, there are already hundreds of MW of government projects under consideration or in the planning phase. Over the coming years ARRA should add to the government’s solar capacity, which will be a good thing for the long-term growth of the industry.

We certainly expect to see some exuberance from industry analysts about the near-term impacts of the ARRA. Recently, as with most industries, the solar industry has been treading water. Companies have been cutting hours, laying off people, trimming expenses, canceling projects, postponing investment and searching for capital. Today we hear the word “consolidation” quite frequently. Many solar companies have been weakened and our first hope is that the industry will strengthen and then trend to the positive. This stimulus bill will certainly help, but not immediately. This will take time. We also hear mixed reports of historically low customer interest and historically high customer interest.  The market signals are mixed, so it is unclear how quickly — and where exactly — the impact will be felt.

While the tally is not complete, we estimate that the U.S. PV market was between 250 MW and 275 MW in 2008. This quarter, as has been the case historically, will be very slow. Given all the changes that flow from the ARRA — the new analysis, new programs and the new processes to be created and implemented — it is an open question whether we can make up the ground and see much growth this year. In our view, with all the challenges, hitting 300 MW nationwide in 2009 would be a real accomplishment. By early 2010 we think the industry will have worked through most of the changes, found our footing again and that significant growth can restart.

The ARRA has a lot of moving pieces and we expect more clarity over the coming weeks and months as we all dive into the details.  It is imperfect, but the intention is clear, get our industry moving.  SEIA and other advocates have worked rapidly and tirelessly to give us a platform that we can build on during this tough time, and for the long run. We’re sure they have more to do and we’re sure our new administration is listening. We hope to report positive results over the coming months that show our industry’s resolve, resilience and dedication to our mission.

Glenn Harris is CEO of the consultancy firm SunCentric Incorporated