More
Home Solar US Government Gets it Right on the Future of Solar; Now It’s...

The U.S government takes a lot of grief, some of it deserved. Criticism might be most pronounced in industrial policy, where the mantra “we can’t pick winners and losers” was proven to many with the demise of solar start-up Solyndra.

But whatever you think about Solyndra, the government actually got it right when it comes to the next generation of solar technology (which will be on display next week at the ARPA-E Innovation Summit)

And amazingly, no one seems to have noticed, except the Chinese.

Before the emergence of the Chinese solar juggernaut, the Department of Energy (DOE)-funded National Renewable Energy Laboratory (NREL) had been studying multiple solar technologies for years. They looked at the world’s current dominant technology, multi-crystalline silicon (mc-Si), but also an alphabet soup of other materials: GaAs, CdTe, CIGS, and CZTS. From that long list the government selected CIGS as the best candidate for transfer from the lab to the manufacturing floor. Working with the state of New York, the DOE formed the PVMC, Photovoltaic Manufacturing Consortium, to facilitate the commercialization of CIGS as the heir apparent to mc-Si. CIGS and only CIGS. They went out on a limb to anoint a winner.

Fast forward two years to September 2013. In an historic, but little publicized  event, the world record for CIGS efficiency passed the world record for mc-Si, the world volume leader and the foundation of China’s surge into solar PV (see Chart 1). Two metrics determine the commercial potential of PV: efficiency (the ability of a solar panel to convert the sun’s rays into electricity), and cost. The winning combination is higher efficiency and lower manufacturing cost. The chart shows the comparative efficiencies of both materials over time. While PVMC helped achieve the outcome, the real credit goes to NREL. NREL is the holder of many of the record results on this chart. 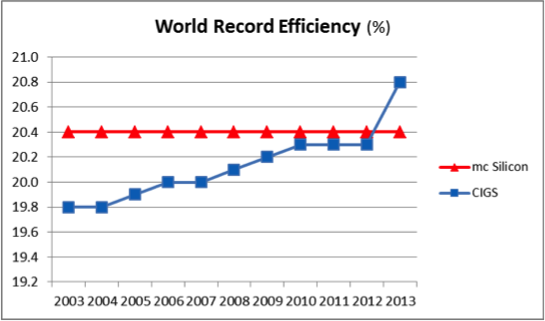 They recognized the inherent capability of this material and developed the key understandings to push the efficiency beyond that of mc-Si.

But what really matters is the efficiency of panels that are shipped to customers, not the R&D results in a laboratory. Where do the results stand in high volume manufacturing (HVM)?  The efficiency numbers on the manufacturing floor are always lower because some efficiency is lost in scaling up from small solar cells to full size panels. In fact, quite a bit is lost. While the record results are around 20%, the production line efficiencies are closer to 14% or 15%. These scaling losses are being reduced over time as manufacturing processes improve, so the gap is closing, but not at the same rate for every material.

The second graph shows the average efficiency achieved in HVM. It is clear that CIGS started out far below mc-Si but the gap is closing quickly. For mc-Si, the numbers are higher and the ramp is slower because this technology has been in manufacturing for 30 years. The processes are mature, well understood and most of the bugs have been worked out. There are over 10 manufacturers with over one gigawatt (GW) of production capacity and there are thousands of engineers working on the problems. CIGS on the other hand is less mature, with not a single supplier having one GW of capacity, and only hundreds of engineers trying to solve the problems. This makes the trajectory of the manufacturing CIGS efficiency all the more compelling. 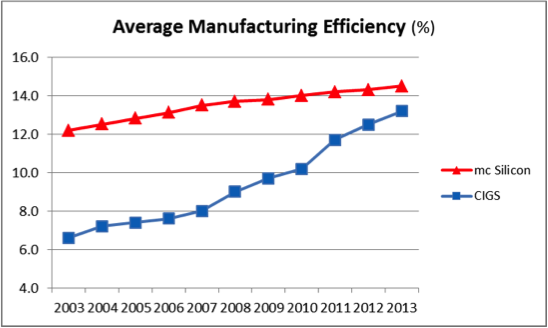 The champion results have already crossed-over and HVM results should follow by 2016. But the story doesn’t end there.

Now it’s time for the government to create a domestic environment to support the manufacturing of the new technology – and do it at home.

From the energy crisis of the late 1970s through the early 1990s, the U.S. government invested hundreds of millions of dollars in PV R&D, yet the country accounted for only 5.6 percent of global PV production in 2008, down from 30 percent in 1999, precisely during the time when the industry started to scale. Germany, China, Saudi Arabia and others stepped in to scale manufacturing, and as a result they own production capacity. And now that the U.S. government has uncovered the potential to harness the power of advanced solar through CIGS technology, we risk losing out on manufacturing again. China, for example, has acquired several U.S. CIGS companies in the past two years. We now find ourselves facing a repeat of past mistakes.

But it doesn’t have to be that way. President Obama has clearly signaled the importance he places on rebuilding the U.S. manufacturing sector, and in particular advanced manufacturing. The Advanced Manufacturing Partnership he created in 2011 has the specific goal of maintaining “U.S. leadership in the emerging technologies that will create high-quality manufacturing jobs and enhance America’s global competiveness.”

Let’s make sure we deliver on that promise. With solar poised to be a major contributor to mainstream energy in coming decades, we can’t afford not to.