LONDON — American and European companies still lead the latest ranking of utility-scale solar project developers to be published by Wiki-Solar. However, Chinese players are leaping up the rankings.

U.S. module producer First Solar again leads the list, with all of the top five players from North America and Europe. But seven of the top 20 project developers now come from China, which Wikisolar cites as the greatest change in the last year with the emergence of Chinese developers both in their home market and internationally.

In June, China became the first country to install more than 3 GW of utility-scale solar capacity, leading the world total towards 15 GW. The global installed capacity of large PV installations grew by 35 percent – almost 4 GW – in the first half of 2013, bucking the slow-down in other sectors of the market, WikiSolar says.

“Not all of these Chinese participants are newcomers,” said WikiSolar CEO Philip Wolfe in a statement; “three of the seven have been on the list since 2011. But China’s burst through the 3 GW milestone has brought many new players into the market”.

“Participation in ‘downstream’ project development and EPC activities seems to have been a smart move for leading solar module manufacturers like First Solar and SunPower,” says Wolfe. “They have probably been able to keep production lines running, without entering the solar module ‘trade war’, which is hopefully now coming to an end.”

He cites the 250 MW California Valley Solar Ranch, completed in June, and the 500 MW Topaz project as examples of the large pipeline of projects in progress which have enabled the utility-scale sector, so far at least, to avoid the malaise affecting other parts of the PV industry.

The U.S. will be next past the 3 GW milestone, and Wolfe predicts it will top the table by the end of the year.

Meanwhile, utility-scale activity is also accelerating on other new markets with projects under construction or approved in South Africa, Chile, Brazil and the Philippines. “Expect to see many more countries heading up the table over the next few months”, says Wolfe.

The risers and fallers amongst the top 20 project developers are illustrated. 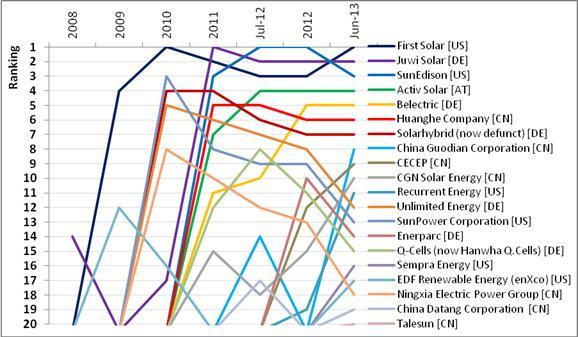