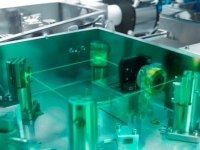 In his presentation, “New laser technology to enhance the performance of photovoltaic cells,” delivered at Intersolar North America 2010, Stollhof stated that new laser technologies, such as ultra-short pulsed lasers make new photovoltaic panel production methods possible. The maximum cell efficiency can be achieved only with extremely precise and fine surface structuring. “Here, the laser comes fully into its own and is significantly more efficient compared to alternative processes, because of increased output and lower production costs,” Stollhof said.

In the production of solar modules from amorphous silicon (aSi) or cadmium telluride (CdTe), conductive and photoactive films are deposited on large substrate areas, such as glass. “After every deposition, the laser subdivides the surface in such a way that the cells created are automatically switched in series by the process sequence,” Stollhof explained. In this way, cell and module tensions, depending on the cell width, can be set. The transparent conductive oxides (TCO) are usually processed with lasers of infrared wavelength. At typical feed rates, repetition rates of over 100 kilohertz result. An optimized pulse to pulse overlap makes for a clean kerf and minimizes negative heat effects. Stollhof states that the TRUMPF TruMicro Series 3000 with wavelengths of 1064 and 532nm suit P1, P2, and P3 patterning. Because of a high pulse-to-pulse stability, the diode-pumped solid-state lasers achieve very good processing results, easily integrated into existing systems because of their cooling design. The patterning of thin-film cells made of Cu(In,Ga)(S,Se)2, also known as CIGS, presents a particularly high challenge for the laser process. This is true for structuring of molybdenum. For this application, nanosecond lasers are still used, but Stollhof asserts that picosecond lasers are a better manufacturing tool. “With picosecond lasers, the material is ablated with ultrashort pulses without significant heating of the process edge zone, which will prevent cracking, melting or exfoliation of the layers,” he explained at Intersolar. TRUMPF offers TruMicro Series 5000 picosecond lasers with up to 50W output power, with a wavelength of 1030nm for structuring molybdenum and 515nm for processing photoactive material and the patterning of the front contact.

To protect thin-film solar modules against unfavorable environmental influences, especially against moisture, a width of approximately 10mm of the layer system is ablated along the edge and covered with a laminated film. For the most part, the photovoltaic industry still uses sandblasting for this purpose, but using lasers is a far more suitable process, explained Stollhof.

TRUMPF produces the TruMicro 7050 for this application, because it can process large areas at production speed. It generates pulses with a duration of 30 nanoseconds at an average power of 750 watts.

Future laser applications include the selective ablation of passivated layers on crystalline solar cells. Here, lasers with ultrashort pulses and high pulse energies are particularly well suited, due to the excellent beam

quality. Said Stollhof: “These conditions can be achieved only by means of laser disk technology at this time.” Because of the simple scalability of the laser output, a higher production capacity can be achieved, and the high beam quality in the ultrashort pulses significantly improves solar cell efficiency. “All this will result in reducing the per watt costs of solar cell performance significantly in future,” said Stollhof.