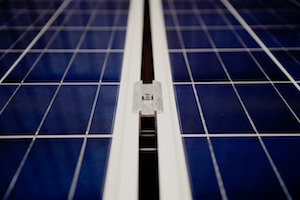 President Donald Trump has agreed to a recommendation by the International Trade Commission (ITC) to grant U.S. solar manufacturers relief from unfair trade practices in the form of tariffs on solar cells and modules imported to the U.S.

That relief includes tariffs of:

The first 2.5 GW of imported cells are excluded from the additional tariff.

The decision is the result of a petition filed by Suniva last year asking the ITC to investigate whether increased solar cell and module imports caused serious injury to the U.S. industry. SolarWorld later joined the petition. Suniva and SolarWorld both filed for bankruptcy last spring.

The ITC in September ruled that the companies had been injured and issued a recommendation for relief in October. The recommendation was sent to Trump for a final decision.

The Solar Energy Industries Association (SEIA) said in a statement that it is disappointed in the decision.

“While tariffs in this case will not create adequate cell or module manufacturing to meet U.S. demand, or keep foreign-owned Suniva and SolarWorld afloat, they will create a crisis in a part of our economy that has been thriving, which will ultimately cost tens of thousands of hard-working, blue-collar Americans their jobs,” said Abigail Ross Hopper, SEIA’s President and CEO.

SEIA said its members believe the decision will be “far-reaching,” but Standard Solar Chief Development Office Tony Clifford said in a statement that the tariffs Trump decided to impose “may slow, but will not stop the U.S. solar industry.”

He added: “The solar industry has come through worse policy decisions and will come through this one, too. The solar industry is nothing if not resilient, and I’m confident the innovative, tough and resourceful members of the industry will find workarounds to the latest obstacle placed in solar’s path. The Solar Century is here, and not even unfair tariffs will stand in its way.”

Mints also said that “an increase in domestic module assembly capacity will not help because the cells will still need to be imported. An increase in cell manufacturing is unlikely in the near term because this requires a significant investment and years-long-to-establish commitment by manufacturers.”

She noted that tariffs imposed in 2012 and 2014 did not encourage cell manufacturing start up in the U.S.

“The current 201 trade case is unlikely to encourage cell manufacturing start up in the U.S. Suniva is unlikely to be resurrected and SolarWorld U.S. (looking for a buyer) does not have enough capacity to serve the U.S. market,” she said. “There is no doubt that this decision will affect market — margins will be constrained and some activity will not take place.”