A new government investigation of SolarCity on the eve of its initial public offering (IPO) may explain how solar leasing is fleecing federal taxpayers and making U.S. residential solar more expensive than in other countries.

The Treasury Department inspector general is probing solar leasing company SolarCity (and others) for its use of “fair market value” pricing on leased systems.  At issue is the federal 30 percent tax credit for solar, based on the installed cost of the system.  As an accepted practice, many leasing companies have reported the “fair market value” to the federal government in lieu of the actual cost.  But in the case of Solarcity’s California operation, in particular, that reported price was often much higher for leased systems than for customer-owned solar arrays.

Solar leasing lowers the barrier to entry for many people, allowing them to get solar on their rooftop without enormous upfront costs or the necessity of navigating local, state and federal incentives.  In fact, the vast majority of residential solar being installed in the nation’s largest market (California) is leased, not owned.  It’s not unexpected when installing and financing solar is so much more complex here in the U.S., with 50 different state markets and complicated tax-based incentives.

But this leasing middleman is the issue for Treasury because he’s allegedly inflating the cost of leased solar arrays to pocket unfairly large tax incentives.  Solar leasing companies are reporting “fair market value” installed costs that are far higher than the actual cost of installing solar.  This nets them a larger 30 percent tax credit (which is based on that reported cost), that largely goes to the bottom line rather than to the leasing customer.

ILSR first covered this issue in May 2011, when I wrote about this phenomenon, tipped off by Jigar Shah from Carbon War Room that solar leasing companies inflated project cost estimates in order for their bank financiers to collect out-sized tax credits.  But Jim Jenal at Solar Feeds added powerful evidence, culled from analysis of data from the California Solar Initiative.

The data shows the reported installed cost for customer-owned and leased solar arrays that participated in the state incentive.  It fingers SolarCity in particular, whose leased systems costs 50 percent more than residential solar projects that are owned by the customer.  The following chart shows the average installed cost of leased and owned residential systems for four different solar contractors in California, using the California Solar Initiative Data from 2010 for smaller than 10-kW residential solar PV projects in Southern California Edison territory. 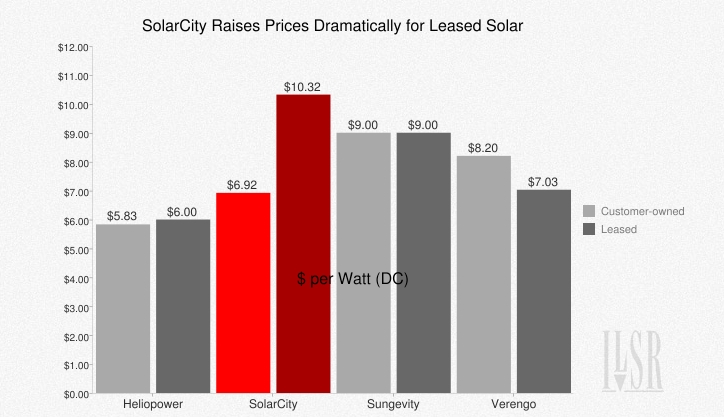 The practice of higher-priced leased systems is not new.  Mr Jenal finds that SolarCity has had a significant price premium on its leased systems since 2008.  His chart is reproduced below. 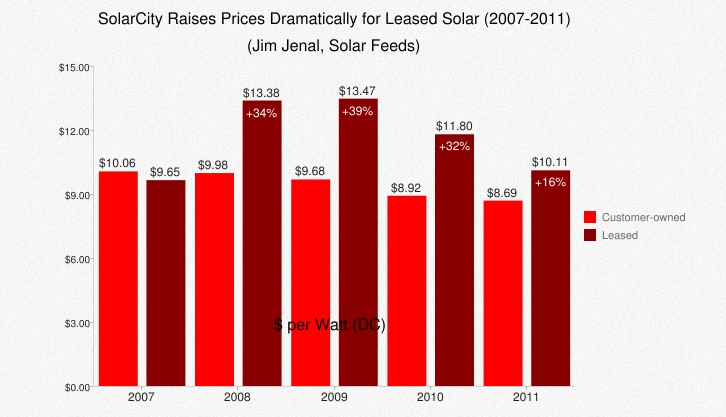 There are explanations, of course.  SolarCity is one of the few vertically integrated solar leasing firms, handling everything from installation to financing.  But the premium seems extraordinarily large even with the additional services.  The Treasury Department seems to agree.

Since the federal solar tax credit pays 30 percent of the system cost, and the significant markup on SolarCity’s leased system means a much larger tax credit.  Mr Jenal calculates that SolarCity has cost federal taxpayers over $10 million in inflated tax credits since the beginning of 2008.  SolarCity and its financiers (which include PG&E and U.S. Bank) presumably also took the federal depreciation bonus (also based on the system installed cost).  At a 20 percent tax rate, the depreciation bonus would have a value of about two-thirds of the tax credit, adding another $6 to 7 million to the tally.

The taxpayer cost may represent malfeasance, but in some ways it’s a side effect of a more pressing problem of leasing.  In places like California, solar power already costs less than utility electricity (with incentives), and the gap is growing.  But leasing companies don’t have an incentive to pass along the growing savings. If the utility sells electricity for 15 cents a kilowatt-hour and Solarcity sells it for 13 cents, customers feel like they get a good deal.  But what if SolarCity can generate that power for 9 cents (or less)?  As more customers turn toward leasing, it may mean that U.S. solar prices will never fall to levels in the most advanced solar markets because middlemen will pocket the difference between low-cost solar and high utility rates.

Even if Treasury finds SolarCity and other middlemen guilty of misusing the fair market value provision, it won’t solve the larger issue.  Perhaps the solution isn’t just a consistent standard for middlemen to report the cost of solar.  Perhaps it’s not having a middleman at all.

This article was originally published on Institute for Local Self-Reliance (ILSR) and was republished with permission.