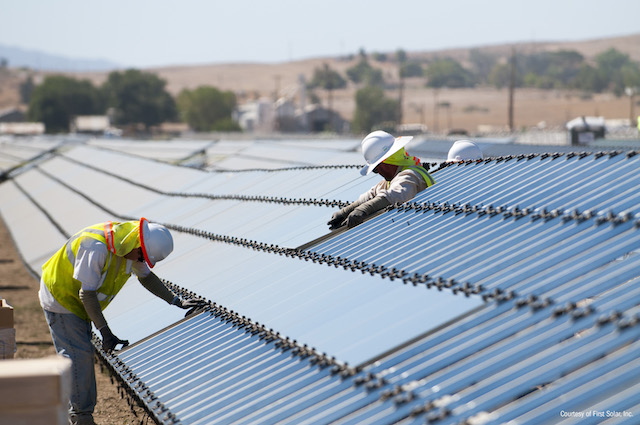 The list of the world’s top solar EPC contractors was released in late February by Wiki-Solar.org. The list ranks the solar developers by number of projects and total installed capacity and reflects about the 30 percent of the market. Wiki-Solar.org says the list shows how the less volatile markets have favored domestic power plant builders. In particular, contractors from India and the US are rising up the ranking. Europeans have, with a few notable exceptions, found it harder to hold their position.

The top contractors, based on cumulative capacity to the end of 2018 were: 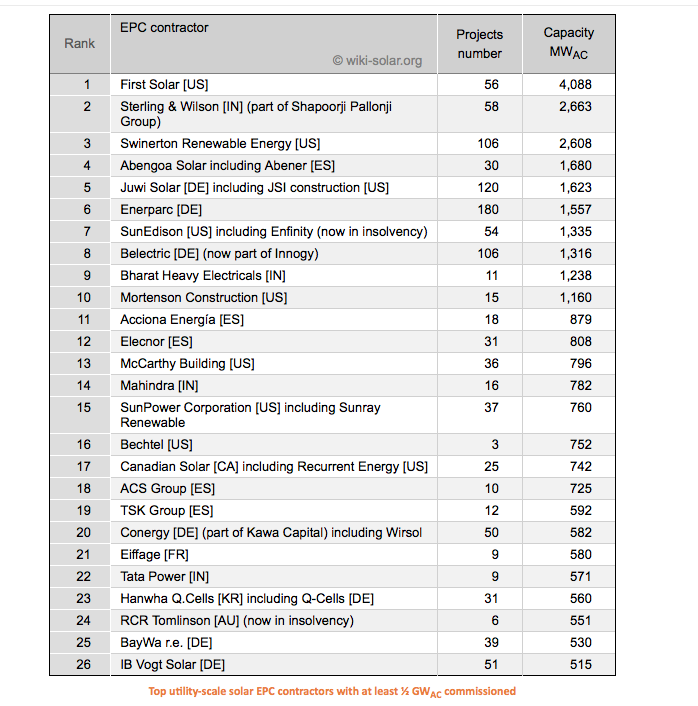 First Solar retains top spot thanks largely to plants installed up to 2016. Its annual ranking in the last two years has been around number ten. “The top positions in 2017 and 2018 have been dominated by Indian contractors like Sterling & Wilson, BHEL and Mahindra, and US constructors led by Swinerton, Mortenson and McCarthy” said Wiki-Solar founder Philip Wolfe.

Abengoa joins the list because Wiki-Solar now includes solar thermal projects, but is likely to slip down the rankings because CSP construction has declined. More volatile market dynamics have led several other European contractors to lose ground. However, Juwi and Enerparc have stayed in the top-6, while Elecnor is climbing again after sliding to #20 in 2016. Growth in the Mexican market, meanwhile, has boosted Spanish constructor TSK Group, while projects in Brazil and Egypt are lifting Italian contractor Enerray.

Australia’s rapid advance in utility-scale solar is reflected by entry to the list of RCR Tomlinson, which however collapsed in November after reportedly becoming over-extended.

Wiki-Solar points out that the contributions of some participants, both on and off the list, may be incorrect, because it holds data on the contractors for only about 30 percent of projects. “Several leading players keep us informed about their contributions,” says Wolfe, “but the involvement of others may be substantially understated.” In particular there should be more Chinese companies in the top ranks than shown here because “Chinese projects tend not to publish details of the EPC contractors.”

It should be noted that this list totals only commissioned projects for which the companies acted as EPC contractors. Many of those listed also act as project developers or in other roles, and are responsible for more overall capacity than is shown here.

Solar project development is a large part of POWERGEN International, which takes place November 19-21, 2019 in New Orleans. Mahesh Morjaria, VP of PV Systems Development at First Solar is an advisory committee member for the event.