New Hampshire — The 2014 rankings for solar module suppliers have been released from the newly combined Solarbuzz and IHS Technology solar research team. The team predicts that the global top 10 PV module suppliers will stay the same, although some reshuffling will occur. The rankings are based on full year shipment estimates.

The group is forecasting Trina Solar to be the largest module supplier in 2014 in terms of global shipments. IHS said that Trina is expected to break industry records for both quarterly and annual PV module shipments in Q4’14. Yingli Green Energy, the holder of these previous records, is expected to be come in as the 2nd largest supplier having adopted a new strategy to prioritize profitability.

JA Solar is forecast to gain most ranking places amongst the top 10 and should come in as the fifth largest supplier in 2014, said IHS. JA Solar’s module shipments are expected to double from 2013 level, outpacing all of the other top 10 suppliers. IHS attribute this growth to JA’s successful transformation from a major cell manufacturer into a leading module supplier.

China, Japan, and the U.S. have been the largest three PV markets in 2014, and unsurprisingly were the key markets for all of the leading PV module suppliers. Japanese suppliers, Sharp Solar and Kyocera leveraged high brand awareness and acceptance in their domestic market to retain positions in the top 10 rankings in 2014.

The 2014 top 10 PV module suppliers are almost the same group of companies as one year ago. SunPower entered the top 10 in 2014 and was ranked joint 10th largest suppliers alongside Kyocera according to IHS estimates.

Many of the top 10 suppliers also accelerated the use of a large quantity of PV modules for internal solar projects in 2014, especially Trina Solar, Yingli, JinkoSolar, and JA Solar. Total unrecognized module shipments that will be used in internal projects will reach 1.4 GW in 2014 for these four companies combined, reflecting these companies efforts to shift towards PV project development, which was pioneered by Canadian Solar, First Solar, and SunPower, said IHS. 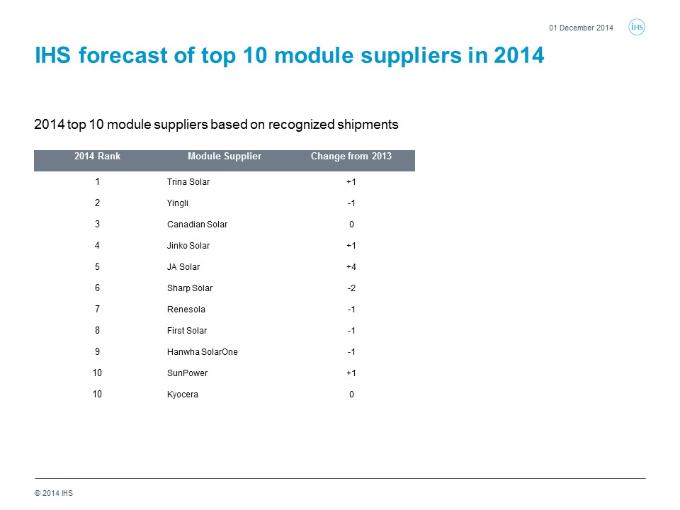