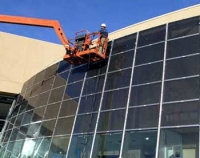 Although Tiger Woods won 10 major championships in his first decade on the PGA Tour, he says his most important legacy carries his name and sits on a plot of land in Anaheim, California, not far from where he grew up. It is the solar-powered Learning Center that he helped create.

“This is by far the greatest thing that has ever happened to me,” the Associated Press quoted Woods as saying about the Tiger Woods Learning Center (TWLC), which was dedicated last week. The high-tech, 35,000-square-foot educational center will offer children grades 4-12 educational programs in a building that houses 100 computer stations, a fully wireless environment, a 200-seat auditorium and a 1,200-square-foot multimedia center. The facility features two solar electric systems — a rooftop array and a custom, curved BIPV curtainwall — both designed by Solar Design Associates (SDA) of Harvard, Massachusetts. The BIPV curtainwall uses custom, thin-film modules with varying light transmission employing ASI glass from Schott. The rooftop array is from PowerLight. SDA worked closely with project architects, Langdon Wilson of Irvine, to ensure that the BIPV application met the architect’s design intent. “The curtainwall design is both curved and sloped, requiring us to specify BIPV modules of differing size and shape as well as differing light transmission,” said SDA President, Steven Strong. “The BIPV curtain wall varies in light transmission from 5% to 30% top-to-bottom — like the tinted band on your car windshield — and transitions to clear at the vision area.” “This is bigger than golf. This is bigger than anything I’ve done on the golf course, because we will be able to shape lives,” Tiger Woods said during the dedication, adding that he viewed the center as a place for students “to explore their dreams and open doors to new opportunities and potential career paths.” Former President Bill Clinton was on hand to help Woods dedicate the center. Clinton said, according to the AP, that he was impressed that Woods had been able “to amass a stunning, unprecedented record and, start giving back at this point in your life.” Tiger’s father, Earl Woods, who has been battling cancer and was unable to attend the opening, has also been a key presence in shaping the center. In an earlier interview, he said, “I hope the message goes out loud and clear that more athletes should give back to the community and give back to the sport that made you what you are today.” The City of Anaheim helped sponsor the solar electric systems. Other project sponsors include Intel, Microsoft, Nike, Dell, AT&T Accenture, American Express, Boeing, PGA, and Deutsche Bank. The center cost $25 million to complete. The TWLC is located next to the H. G. Miller Golf Course, where Woods played during high school, and just miles from Woods’s childhood home in Cypress, CA. True to Woods’s chosen vocation, the center also has a driving range and an 18-hole putting course. “This is their center, and I hope it serves as a launching pad to great success,” Woods said.