New Hampshire, USA — Statistics released this week by SunRun and the PV Solar Report show the growing popularity of residential solar energy in general, and third party-owned solar in particular.

Third party-owned solar installations have grown significantly in the past few years, and now represent more than half of new solar capacity in California and a handful of other states, according to Greentech Media. For residents, outright self-ownership might be more expensive up-front but could generate an overall higher return, but along with ownership comes decisions about maintenance and other issues, notes Stephen Torres, managing director of the PV Solar Report. With the third-party model, “all that other stuff is taken care of; someone will do it for you, and for lower overall cost.”

Total solar energy systems in California rose 54 percent in 2012 to nearly 40,000, according to the PV Solar Report. In terms of contract dollar values, more than $1.2 billion of solar energy systems were sold, a 41 percent increase from 2011. Third-party owned solar delivered than $938 million to the California economy in 2012, an 86 percent jump from a year ago and roughly equaling the previous five years combined, according to their report. 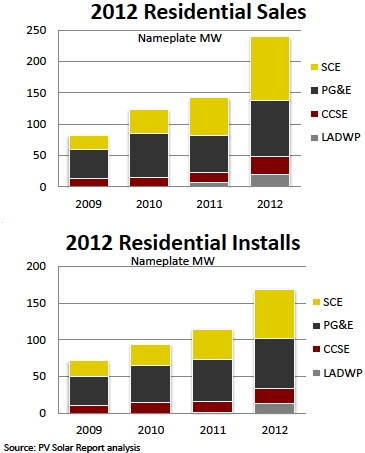 San Diego, San Jose, and Bakersfield all reported more than 1000 total solar energy systems sold in 2012, and Los Angeles, Murrieta, and Temecula all doubled their total installations from a year ago.

Note what these communities have in common: a lot of sun, and high electricity prices. San Francisco is an outlier for the former, but certainly not the latter; it’s also one of the bigger adopters of third party-owned solar. 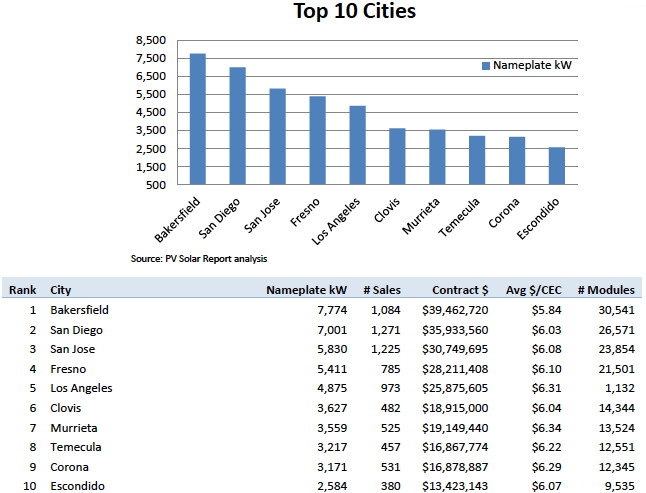 Third party-owned solar system sales doubled to nearly 29,000, and now represent 74 percent of the state’s home solar market, up from 56 percent of homeowners who went solar via the third-party route in 2011. San Diego, Murrieta, and Temecula, all tripled such systems from a year ago. Third-party sales are particularly favored in Clovis, Bakersfield, Fresno, and Murrieta, where they represented more than 80% of total systems sold in 2012.

“We are seeing notable growth across the board, with a particular emphasis on growth in median-income zip codes,” explained Susan Wise, SunRun’s ‘consumer educator,’ in an emailed response. “The concept that solar is limited to wealthy, coastal communities is a myth.” (SunRun, of course, is among the vendors who provide such third-party solar services, from system ownership to maintenance to insurance.)

The wide adoption of third-party-owned solar systems are indeed taking a chunk out of the market of cash deals where the homeowner buys and owns the system), but not as extensively as expected, noted Torres. “We expected those to be cannibalized completely,” he said, but cash sales have “really stayed the course.” 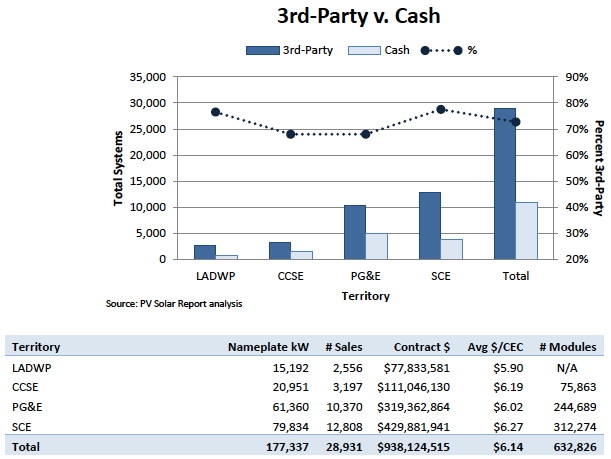 Torres offered a peek inside the massive and granular master database, which tracks and compares solar systems at the city, installer, and component level. Another interesting correlation reveals the different marketing strategies among panel suppliers — SunPower has the largest share of modules sold, and not by small margin, despite not having a presence among the top three installers who put in residential solar systems in California (SolarCity, Verengo, and REC). That illustrates the power of building a large installer network, as opposed to other panel brands which choose a price/volume strategy, he noted.