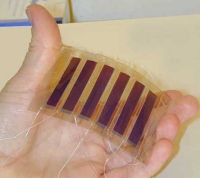 Columbus, Ohio [RenewableEnergyAccess.com] When it comes to producing earth-friendly solar energy, pink may be the new green, according to Ohio State University researchers. Scientists there have developed new dye-sensitized solar cells (DSSCs) that get their pink color from a mixture of red dye and white metal oxide powder in materials that capture light.

Currently, the best of these new pink materials convert light to electricity with only half the efficiency of commercially-available silicon-based solar cells—but they do so at only one quarter of the cost, said Yiying Wu, assistant professor of chemistry at Ohio State.

And Wu is hoping for even better.

“We believe that one day, DSSC efficiency can reach levels comparable to any solar cell,” he said. “The major advantage of DSSCs is that the cost is low. That is why DSSCs are so interesting to us, and so important.”

Pink is a typical color for DSSCs. Most use dyes containing ruthenium, which has a red color; the metal oxide powder that turns the mix pink is most often titanium oxide or zinc oxide, which are both whitish in color. But Wu’s materials are novel in that he’s using more complex metals and exploring different particle shapes to boost the amount of electricity produced.

In a recent issue of the Journal of the American Chemical Society (JACS), he and his team report that they have made a new DSSC material using zinc stannate.

This is the first time that researchers have made a DSSC from anything other than a simple oxide. Wu and his colleagues chose zinc stannate because it belongs to a class of more complex oxides with tunable properties.

“This opens up new possibilities for how scientists may tailor the properties of DSSCs in the future,” he said.

Color determines the wavelength of light that a solar cell can capture, so adjusting the color lets scientists optimize particular properties in how the device will function. So far in the development of DSSCs, scientists have gotten the best performance from red ruthenium dye.

“If you want to achieve the best efficiency, you need to consider both the voltage you can achieve and the current you can achieve,” Wu said. “If you absorb a very broad range of wavelengths, that’s going to sacrifice voltage. And if your absorption energy threshold is very high, you can achieve high voltage, but you’ll sacrifice current. The idea is to find some balance.”

But electrons can get lost when traveling between particles. That’s why Wu is working on designs that incorporate tiny nano-wires that carry electrons directly to a circuit.

Last year, he and his team published a paper in the Journal of Physical Chemistry B describing DSSCs that contained particles and nano-wires of titanium oxide. That formulation achieved 8.6 percent efficiency—roughly half of the 15 percent efficiency typical of commercially available silicon solar cells.

In the new JACS paper, they report that a formulation with zinc stannate particles—but no nanowires—achieved 3.8 percent efficiency. Now they are working to combine the two strategies, by making nanowires from zinc stannate and other oxides.

They are also exploring the possibility of using nano-trees—nanowires shaped like the branches of a tree.

“We asked ourselves, what structure is best for gathering light and also transporting materials—a tree. The leaves provide a high surface area for capturing light, and the branches transport the nutrients to the roots,” Wu said. “In our DSSC design, the dye-coated particles would provide the surface area, and the nano-trees would branch out in between them, to transport the electrons.”

So dye-sensitized solar cells may contain tiny pink “trees” in the future, but other colors are possible, he said. Researchers are studying new dyes and dye combinations that may work better.