California, United States [RenewableEnergyWorld.com] Thin-film solar cells are rapidly taking market share away from the established crystalline technology, with their portion of Photovoltaic (PV) wattage more than doubling by 2013, according to iSuppli Corp. Thin-film will grow to account for 31 percent of the global solar panel market in terms of watts by 2013, up from 14 percent in 2008.

“The market viability of thin-film has been solidly established by First Solar Inc. as it rockets to become the world’s top solar panel maker this year, with more than a gigawatt of production,” said Greg Sheppard, chief research officer for iSuppli. “At the same time, the company has driven its cost of production to less than 90 cents per watt, keeping its costs at approximately half the level of crystalline module producers.”

Most solar panels are made of crystalline wafers with 180 to 230 microns of polysilicon. In contrast, thin-film panels are made by depositing multiple layers of other materials a few micrometers in thickness on a substrate. 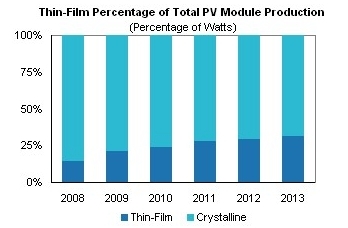 The main tradeoff between the two technologies is efficiency versus cost per watt of electricity generation. Thin-film panels are less efficient at converting sunlight to electricity, but they also cost significantly less to make.

At the same time thin-film is at a disadvantage when installation space is limited, such as on a residential rooftop. A thin-film installation can take 15 percent to 40 percent more space to achieve the same total system wattage output as crystalline. This tends to limit its appeal in certain applications.

The average thin-film solar panel price is expected to decline to US $1.40 in 2010, down 17.6 percent from $1.70 in 2009. Average prices for crystalline panels are expected to drop to $2.00 in 2010, down 20 percent from $2.50 this year. Through 2012, crystalline prices will continue to close the thin-film pricing gap to some degree because its purveyors collectively have deeper pockets and keep pouring on capital spending, technology R&D developments and manufacturing refinements, iSuppli expects.

Another accelerator of thin-film technology is the rising availability of turn-key production lines from companies such as Applied Materials, Oerlikon, and Centrotherm.