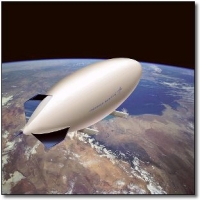 Uni-solar has landed some truly out-of-this-world contracts lately. The U.S. Government, and its contractors have taken a particular interest in the possibility that thin-film solar photovoltaics (PV) could play a major role in the development of a missile shield over the United States and other airborne, or space-related applications.

Auburn, Hills Michigan – June 10, 2004 [SolarAccess.com] In the most recent funding boost, the Air Force Research Laboratory (AFRL) in Kirtland AFB, New Mexico, awarded Uni-Solar a US$4.45 million, 18-month contract to continue development of new solar cell technology to be used in space and airship vehicles addressing defense and homeland security applications. The particular attributes of thin-film solar PV appear to lend themselves well to space-based applications, according to Uni-Solar. “Considering the high launching cost of satellites, Uni-solar lightweight cells are economically attractive for space applications,” said Stanford Ovshinsky, Chairman and CEO of Uni-Solar Ovonic and President and CTO of ECD Ovonics. “We are very happy that we are opening up a new era of air and space solar energy solutions so vital to our nation’s future.” This funding comes on the heels of earlier successful contracts with the government and its contractors. In May 2003, AFRL awarded a $11.5 million contract to Uni-Solar to develop its ultra-lightweight solar arrays to be used in space and airship vehicles under which AFRL had an option to extend the contract with Uni-Solar to provide additional funding. That extension is now secure. “Next generation solar arrays for Air Force missions need to be cheaper, lighter and more stowable than what are currently available,” said Dr. Donna Senft, Program Manager of the AFRL Advanced Power Generation Program at Kirtland AFB. “We are impressed with the work that Uni-Solar Ovonic has been carrying out under AFRL contracts to address these goals.” Thin-film solar PV provides a light-weight, flexible alternative to crystalline silicon, gallium arsenide, or other variaties of PV. For use in satellite applications, thin-film cells can be stowed compactly during launch and then rolled out in space for use. Not all these funding rounds deal just with satellites either. In a closely-related contract in March of this year, Uni-solar was awarded a contract from Lockheed Martin to develop and deliver solar cells on polymer substrates. These solar cells will be used by Lockheed Martin in Phase 2 of the High Altitude Airship (HAA) program, awarded by the Missile Defense Agency in September 2003. That contract put Lockheed Martin to the test of developing an airship that can sustain operations for one month at 65,000 feet while providing 10 kW of power to a 4,000-pound payload. The prototype airship will become part of the Ballistic Missile Defense System Test Bed following a successful demonstration in 2006. That’s right – benign, tree-hugging solar technology could bare its teeth as a crucial component of U.S. military defense. Uni-solar’s thin-film is key part of this particular application. In the case of the HAA program, the flexible nature of thin film PV would allow it to be bonded to the curved skin of an airship. Typical crystalline solar based on glass substrates cannot typically conform to a curved surface. The high-altitude airship prototype aims to demonstrate the technical feasibility and utility of an autonomous, solar-powered airship, according to a recent statement from Mike Baumgartner, Lockheed Martin’s HAA program director. The current design is a non-rigid, super-pressure airship, expected to be 150 feet in diameter by 500 feet long, with a total volume of 5.6 million cubic feet. The airship will be controlled by four electrically-powered, vectored propulsion pods and powered by a solar regenerative battery-based power system with thin-film PV — such as Uni-solar’s — on the hull surface. Such a crafts could be instrumental in the future of a missile defense shield over the United States if the program proves successful. The long term — and some say elusive — goal of such a shield would be to shoot down incoming missiles launched against the United States. Despite the challenges and critiques from scientists and politicians alike, a missile defense shield has remained a priority for the Bush Administration. Whether Uni-solar’s thin film ends up deployed in satellites or in a missile defense shield airship, both would certainly be a far cry from PV’s more domesticated brethren powering homes and businesses back on earth.