The New Energy debate over whether it would be best to develop centralized generation infrastructure or distributed generation sources effectively ended in the Spring of 2010 when 29 men died in a West Virginia coal mine cave in, 11 more were incinerated in an offshore oil drilling platform fire and the entire Gulf of Mexico coastline faced the onslaught of ruination as a result of the drilling platform disaster.

The debate’s dichotomy is a straw man, a non-existent choice in the real world. The age of fossil foolishness is rapidly waning. Centralized AND distributed New Energy capacities are both urgently needed. They complement each other. Technology Roadmap; Solar photovoltaic energy, from the International Energy Agency (IEA), complements the simultaneously released report on concentrating solar power (CSP) described in THE WAY TO BIG SUN . Together, photovoltaic (PV) solar – which uses the sun’s light – and CSP – which uses the sun’s heat – can generate over 22% of the world’s electricity by the middle of this century. PV will provide half of that, generating 11% of world electricity by 2050. As electricity-powered personal transport becomes the new norm, these emissions-free, domestically produced sources of power become a quarter of the answer to the question of how to live without the deadly, destructive Old Energices. So far, there is no reported instance of a PV solar panel or a CSP heliostat exploding. A rooftop system installer recently bumped his ankle on a PV panel and he considered it a small tragedy but it didn’t make the news. ::continue:: 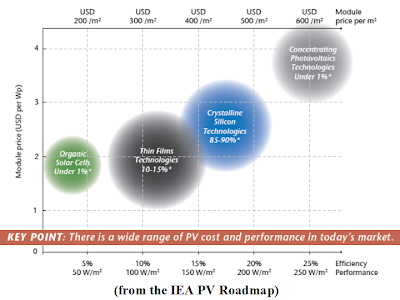 click to enlarge Generating power in the quantities the modern world now requires it – and in the even more humongous quantities that will be demanded as economies like Brazil, India and China emerge into modernity – will inevitably have consequences. The Silicon Valley Toxics Coalition has already begun working to build the infrastructure to safely recycle the toxic ingredients in photovoltaic materials. Senator Diane Feinstein (D-Calif) is leading an aggressive effort to protect the most precious undeveloped lands from CSP solar power plants and she is also taking the lead in a multi-state effort to completely ban offshore oil drilling on the Pacific Coast. Demonstrating the IEA’s fundamentally conservative bent, the PV and CSP Roadmaps are part of a thorough scientific, economic and policy assessment of 19 New Energy options in pursuit of identifying the best path to the IEA’s (completely inadequate) goal of a 50% reduction in world CO2 emissions by 2050. Among the options, the richness of the sun’s potential is unique. Only the right “effective, long-term and balanced” policy initiatives are needed to take away the Old Energies’ artificially-created cost advantages and build the economies of scale in the solar sector necessary to bring solar power prices into competitive alignment with other sources of electricity generation. Unlike CSP, which requires a special high-saturation type of sun, PV requires no special Direct Normal Irradiance (DNI) of sunlight. It can be (and has been) put to work almost anywhere there is sunlight. World PV capacity has grown an average of 40% per year in this century and the world’s spending on PV research and development doubled in the 21st century’s first decade, from $250 million in 2000 to $500 million (in 2007). At current rates of growth and technological advancement, the IEA expects PV solar to be price competitive in the most sun-saturated parts of the world by 2020. When solar PV achieves widespread cost competitiveness with other sources of grid supply, the “effective, long-term and balanced” policies that helped build manufacturing capacity and deployment will “evolve” into those that support self-sustaining PV markets. Financial incentives will phase out in favor of those that obtain and maintain grid access and integration, ongoing investment in R&D and international cooperation in building capacity for emerging economies. 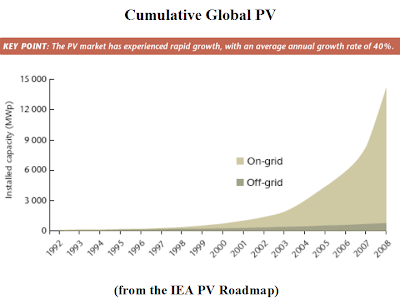 click to enlarge This post is based on Solar power could produce 25% of global electricity by 2050, studies say by Tiffany Hsu (May 12, 2010, LA Times) and Technology Roadmap; Solar photovoltaic energy (11 May 2010, International Energy Agency) Click thru for more on this and more NewEnergyNews