More
Home Solar The Solar PV Ecosystem, A Brief History and a Look Ahead

Summing up recent pricing history, in the mid-2000s, Germany jump-started a period of significant demand when it introduced its feed-in-tariff incentive model. This model spread fairly quickly to other countries both in Europe and outside of it. As more countries adopted the profitable FiT model, manufacturers began adding capacity. Investors, seeing what they assumed would be a stable investment, jump-started the creation of multi-megawatt (utility scale) fabrication plants. As the PV industry had little experience with rapid adoption of its technology, participants were forced to, basically, learn on the job. This behavior placed the solar ecosystem into a tactical situation; essentially, living for today while hoping today’s lessons would apply to tomorrow.

Before the FiT era, most PV manufacturers existed on slim to no margins. The FiT era also coincided with a severe polysilicon shortage. Prices for polysilicon surged and crystalline manufacturers were forced to pay in order to stay in the game. Note that during this time costs for c-Si manufacturers increased, but so did margins. As the price of PV technology (cells and modules) increased, thin film manufacturers saw a market opportunity and grabbed it. During this period it was assumed that thin films would take, rather rapidly, a major share of the market and that c-Si was an outdated technology that would soon be supplanted.

The FiT model was hailed as the savior of the industry and was expected to propagate rapidly and seamlessly. In 2009, manufacturers from China, specifically, but also other low cost manufacturing regions, entered with aggressive pricing strategies that were supported by healthy manufacturing subsidies. These manufacturing regions were initially developed as export markets to feed growing demand in Europe. (It is worth noting that aggressive pricing has come and gone throughout the PV industry’s entire ~40-years.) As prices swiftly declined, demand ramped up, markets overheated, significant and sometimes retroactive changes were made to FiTs, the global financial system came close to collapse over derivative trading and a global recession ensued – granted, this is a vast oversimplification.

Following the recognition that the FiT was not sacrosanct, investors grew wary, bankability became the industry standard, and the prices continued to decrease. In the beginning the price decreases were hailed as progress. As time passed and the competitive situation became more brutal, anger increased, eventually spawning trade disputes in the U.S. and now in Europe. Note that no government is completely fair in the disbursement of subsidies to its manufacturing sectors. Unfairness is in the eye of the un-subsidized.

During the early days of the FiT, all PV manufacturers increased prices in some cases the needs of long term demand side customers (whose loyalty has historically been crucial to PV manufacturers) were ignored as more profitable customers were served.

As prices crashed and manufacturing capacities increased along with inventory levels – not to mention changes in the FiT model and the emergence of bidding as the new incentive model, demand side participants began to enjoy increasing margins along with increasing demand as did balance of systems manufacturers.

Figure 1 depicts PV module price history from 1996 through to the estimate for 2012. The average selling prices are from the manufacturer to the first point of sale, that is, first buyer.

It all comes down to value – basically, how much the buyer wants a good and how much a seller wants to get rid of that good. This theory assumes that the market is functioning normally and that the equilibrium price is therefore the natural and correct price. This being the case, and aside from the fact that the solar market has never behaved normally in terms of economic theory, the equilibrium point for solar prices as represented in Figure 1 should be somewhere between $1.48/Wp and $2.00/Wp. Instead, the average price for PV technology to the first point of sale in 2012 will be ~$0.98/Wp with inventory prices averaging $0.69/Wp for the year.

Unfortunately, rumors of an accelerated learning curve and the expectation of even lower prices have placed a lock on the industry’s ability to raise, or simply stop lowering ASPs. In simple terms, the balance of power between buyers and sellers has tipped back to the buyer, and buyers, along with investors, balance of system manufacturers and in a few cases, end users are enjoying higher margins and lower system prices.

Realistically, though it does represent a short term view, demand side participants cannot afford to see the damage being done to PV technology manufacturing for what it is – lack of investment in R&D, in some cases low quality product, loss of intellectual capital and in the worst case company failure. 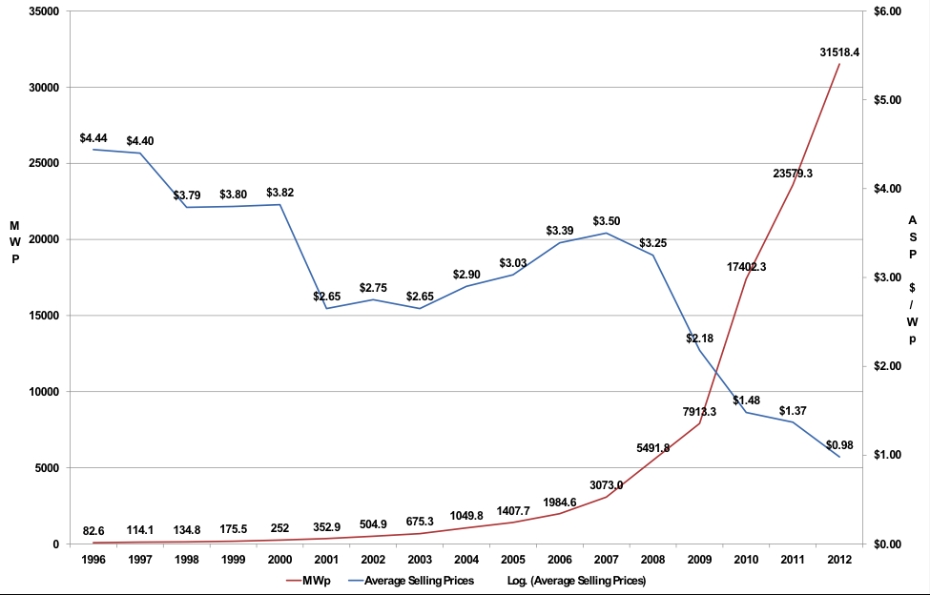 Forget normal buyer-seller tension, PV industry participants are at each other’s throats with manufacturers struggling to survive and demand side participants refusing to accept the possibility that an increase in price would be good for the entire industry. The extreme and accelerating price decreases have been widely referred to as progress or proof of the solar version of Moore’s Law. Moore’s Law holds that the number of transistors per square inch on an integrated circuit will double every two years. For the photovoltaic industry this has been interpreted to mean that the price of PV/Wp would decrease by ~20% for every doubling of shipments. Though pricing behavior (for any industry) is usually erratic, overtime, and a lot of time at that, this will likely prove true. However, for the industry to recover – and this is separate though not mutually exclusive from the current consolidation – prices need to stop falling, and this will not happen until the PV industry consolidation is completed and the inventory is worked off (both supply and demand).

Solar’s twin goals have always been to work towards increasing efficiency and lowering manufacturing costs. Equally important goals include system installation efficiency (doing it faster) along with inverter and other balance of system innovations, including storage. The software model of technology development typically includes the expectation that customers will in beta versions, find bugs, leading to innovation and improvement. The fast growth of the PV industry has turned deployment into an outdoor lab for beta-deployment of its technology. This behavior is perfectly understandable for an industry that is incentive driven, but, it is dangerous for an industry where failures are highly visible and harshly judged.

Figure 2 presents average prices for natural gas to the Henry Hub from 2003 through the estimated average for 2012. This chart is presented as an example of price volatility overtime. Average prices for natural gas are ticking up currently (The October average was $3.32/Million BTU) as demand increases. However, capacities are increasing and a decrease in price (after winter) can be assumed. It is important to note that NG prices for residential and small commercial consumers are significantly higher than the price to the hub. In California ~60% of electricity is NG driven. 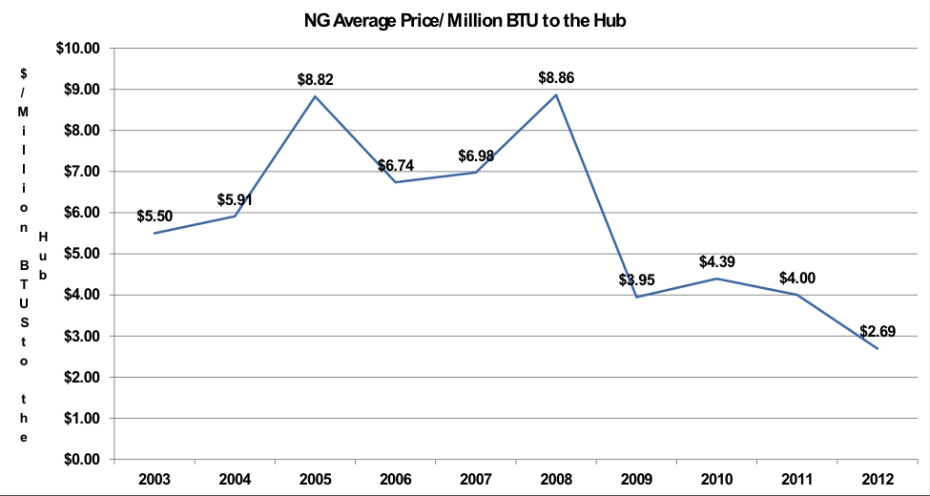 The Solar Ecosystem is Populated by Partners, Like it or Not

The current situation is not one of natural selection – it came about because of choices that were made by industry participants all of who are up against significant odds, constraints and pressures in competition with other renewable substitutes and subsidized conventional energy.

Demand side and balance of systems participants are tired of the doom and gloom. Low prices for PV modules are leading to stronger demand and they do not want to see them either increase, or to stop decreasing.

PV cell and module manufacturers are tired of low to negative margins and failure. Startup technology manufacturers are reducing costs and trying to wait out the current period. R&D budgets are suffering. Failures continue.

It will be difficult for true learning curve progress in terms of increasing efficiency and reducing manufacturing costs to take place in the current low margin climate. The most that can likely be hoped for is that once the inventory is worked off prices will stop falling and hopefully stall until cost reductions catch up. In the meantime, the future of the solar industry still relies on innovation from one end of the value chain to the other – including end users of electricity.

End users can demand energy independence and quality clean electricity and the solar industry as a whole can help them put an appropriate value on these attributes. As to innovation, despite the desperate climate for technology manufacturers, ideas are percolating. The solar industry is global, it will recover, and progress towards a sustainable future will be made with the participation of all regions, as partners.