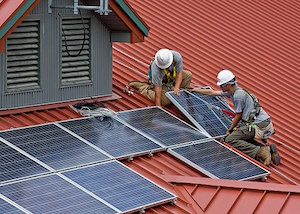 This article is the second in a three-part series on the Suniva/SolarWorld trade case.

If you think DIP firms have the interests of former employees or American solar manufacturing workers at heart, you are sorely mistaken. In fact, back in May, the original Suniva DIP made an offer to the Chinese solar industry to withdraw the filing if the Chinese would pay them $55 million. Suniva appears to have no plans to restart its manufacturing operations.

When a company files for a bankruptcy, the debtors take control of the business and assets as Debtors in Possession and provide funding to continue the operations or dispose of the assets. Suniva’s original DIP was SQN Asset Servicing, LLC (“SAS”) and certain affiliates. One of those affiliates, SQN Ventures, LLC (“SQN”), a British venture firm, with major operations in New York and London, had previously loaned Suniva nearly $50 million that was secured by all the company’s assets.

In April, SAS provided Suniva with $4 million to prosecute the Section 201 trade case. After the original filing, another venture firm, New York-based Red Lion Capital, put up $1.5 million and joined SAS as a fellow “Debtor in Possession.”

SQN Asset Services is the entity that financed and organized the Section 201 trade case. It is definitely not an American-owned firm. In fact, SAS does not even want you to enter their website if you are an “American Person.” Just go to their website, click on the “Asset Finance” link at the bottom of the page, and you’ll see what I mean.

Moreover, SAS is a British firm chartered on the island of Guernsey, another tax haven. Recently, a retired London-based investment banker I spoke with described Guernsey as “the soft underbelly of English capitalism.” Why? Because a lot of unsavory types are known to channel money through this tax shelter haven.

Why Organize Your Business in A Tax Haven?

Companies are chartered or incorporated in tax havens like Guernsey, the Cayman Islands and Panama for two reasons: tax avoidance and shareholder privacy. Plenty of well-known American firms, including Google, Apple and Amazon, have incorporated offshore subsidiaries in such places to avoid U.S. taxation.

But publicly-traded firms who own such subsidiaries typically disclose their existence. Thousands of other firms and individuals worldwide use such tax shelters to shield the real owners of entities from public view. Unfortunately, the “real” owners can include corrupt government officials, oligarchs, organized crime kingpins, dictators and other nefarious types whose ownership could not survive the light of day.

Unless there is a major leak of confidential information like what happened in 2015 with the tax shelter law firm in Panama, we may never know who actually owns the firm that is financing the Section 201 trade case. However, based on the warning on their website, we do know that SQN Asset Services is not owned by Americans.

Having established that this trade case is being funded by foreign companies that don’t have American workers’ interests at heart, we’ll look in the final installment of this series to see if there is any benefit to American solar workers if Trump upholds Suniva’s petition.