Now you see it now you don’t – disappearing margins for PV manufacturers are not a magician’s trick, nor are they the phenomenon of current solar times. The low to zero to negative margins un-enjoyed by today’s technology manufacturing sector are the result of years of choices made by an industry stalwart in its belief that solar is the answer yet beset by end users who, having many choices, many times choose something else.

For most of its history manufacturers have wielded little control over the price function.  This was true because solar is the energy technology interloper trying to take share from subsidized conventional energy.  The PV industry was also trying to change the buying paradigm from renting to owning the means of production.  No technology change – including indoor toilets) has come easily.  For the photovoltaic industry (and all solar) it has been difficult to sell energy buyers on the vague concept of energy independence, meanwhile the pay off and ROI arguments had limited success.

Any industry forced to push its product into the market will not have control over its price function.  When promises of extremely low system prices are inserted into the mix the goal becomes antithetical to the development of high quality, long lived and reliable technology.  The only tool in such a difficult pricing ecosystem that can and almost always works is aggressive pricing for share.  Aggressive pricing is not unique to the PV industry.  Periods of aggressive pricing can be picked out from most industry’s histories.

For the PV industry, all regions and most manufacturers have practiced aggressive pricing from one time or another.  Panicked pricing is something entirely different, and this is the situation that the PV industry is currently embroiled in – with promises of grid parity, expectations from the installers/system integrators, and more. From end users to government entities (those that legislate either for or against incentives), the industry is currently caught under a ton of expectations with little wiggle room and no way to go but down in terms of prices. This is not a healthy situation and it is very difficult to change.  If it were to change, system integrators and installers would face significant margin pressure themselves.

The current pricing climate is truly a no-win situation.  Figure 1 presents cell/module revenues to the first buyer from 2001 to 2012, with a forecast through 2016.  The revenue data in this figure does not include inventory reselling, or outsourcing (rebranding of technology by module assemblers and other technology manufacturers).

Figure 1: PV Cell/Module Revenues to the First Point of Sale 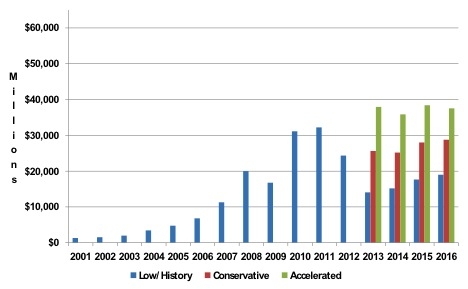 Who’s on First, and if Everyone Is Losing Money, Does it Matter?

It is the time of the year when the top ten manufacturer lists come out and a good time to pose this (hopefully) rhetorical question … if the manufacturers on the top ten list have low or negative margins, high debt and risky profiles, what does the list mean?  Granted, low margins have historically been an industry reality but it should not be viewed as the status quo.  Removing subsidies for all energy technologies would help make solar competitive while the high prices for conventional energy might just convince energy buyers of the value of energy independence.

Table 1 offers the top ten lists of PV cell and modules manufacturers to the first buyer from 2002 through 2012.  Note that some on this list are no longer producing. Also note that the names have changed overtime. Sharp Solar has the distinction of being at the top of the list for the longest period since 2000.

There is an argument to be made that true wisdom should not be conventional…nonetheless, CW is rumbling lately that PV technology manufacturing will now be in Asia due to low manufacturing costs.  Aside from the fact that if all manufacturers in all regions are losing money and struggling to survive regional leadership has switched over time.

The US was the manufacturing leader for many years, followed by Japan, Europe and now China.  Eventually another region or country will take over cell/module technology shipment leadership.  It would be best if this happened in a healthy industry with margins that included room for R&D and a marketing concept that educated and then wrenched electricity consumers free from renting electricity to owning the means of production.  Table 2 offers regional shipment leadership from 2002 through 2012.