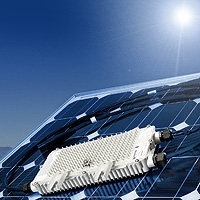 California, United States [RenewableEnergyWorld.com] Solar panel makers are spending tens of millions of dollars to make their products produce more power from the same amount of sunlight. Parallel to that, there is a growing number of companies that are building technologies that can squeeze out more power from the panels that are already on the market. These companies, large and small, are bringing to market software and hardware that provide solar systems with so-called distributed inverter architecture. If successful, they stand to disrupt the businesses of companies like Germany’s SMA that build the central inverters that currently dominate the market.

“Yes, the current guard are improving their inverter designs,” said Eric Wesoff, senior analyst with research and media firm GTM Research. “But they aren’t doing what the distributed inverter makers are doing.”

The idea is to push some or all of the features of the traditional central inverter out to the panels themselves. Typical solar installations today rely on one central inverter, which performs two key functions—converting the direct current (DC) coming from the panels to the alternating current (AC) used by the electric grid, and performing algorithms using electronics known as Maximum Power Point Tracker to maximize the power produced by the system.

But advocates of distributed architecture say that the central inverter has two primary shortcomings. It relies on one device that, when faulty, brings down the entire system and it’s inherent design means the weakest panel in each string eliminates the benefits of better functioning panels.

This later point is especially important. Solar systems are exposed to the elements and that means it’s likely that one or more panels (or cells) over the lifetime of a system will eventually be covered in debris, dust or other forms of shading. Some panels might just be faulty and still others, as a result of age, will inevitably weaken faster than others.

A report by the testing and consulting firm KEMA for the California Energy Commission in 2005 found that about 70 percent of surveyed installed solar systems had reduced output due to shading, some experiencing reductions as high as 30 percent. And since the maximizing algorithms traditionally are done at the central inverter, the extra juice coming out of better-performing panels is lost.

Petaluma, CA-based Enphase Energy says it has a solution to these problems. The company, which has more than $40 million in venture funding, builds a microinverter that attaches to the rack at each panel. Each microinverter performs the functions of its bigger, central cousins, and in so doing increases the power output of arrays by between 5 and 25 percent, said Raghu Belur, co-founder and VP of marketing for the startup.

With Enphase’s architecture, if one panel is underperforming, it doesn’t affect the output of its neighbors in the same string. Belur said Enphase’s technology also reduces the total cost of energy by reducing component and labor costs, and the system is safer since low-voltage AC streams from each panel rather than having a massive accumulation of DC power at the central inverter.

Enphase, which has shipped “tens of thousands” of units since last July, has distribution deals with solar installer Akeena Solar and panel maker Suntech Power in addition to traditional solar equipment distributors. Belur said the company currently is negotiating deals with global panel makers to install its microinverters onto their panels at their factories. That would mean the panels would come bundled with the microinverters. This, Belur said, would result in even more labor savings, but he wouldn’t say when the embedded products would be on the market.

While Enphase has first-mover advantage, a host of other startups are close on its heals. One of them, Austin, TX-based SolarBridge Technologies, also is developing a microinverter to be installed at each panel. Like Enphase, the microinverters send a signal about each panel’s performance that is routed to the internet and displayed on a web portal. But SolarBridge, which has raised $6 million in venture funding, has decided to exclusively distribute its products by embedding them in solar modules.

Joe Scarci, VP of marketing, said the company is in talks with global panel makers and he expects to start shipping by the first quarter of next year. This distribution model is more capital-efficient than selling the microinverters to installers or distributors, Scarci said.

Scarci also said that SolarBridge’s design has worked around the components, such as the electrolytic capacitors, that have the highest rates of failure. “We started with a clean sheet of paper, looked at all the reasons inverters fail and eliminated those components,” he said. The upfront costs of SolarBridge’s microinverters will be cheaper than central inverters for residential systems and be slightly more for commercial systems but that the difference would be made up in lower labor costs, Scarci said.

But microinverters aren’t the only new game in town. Another group of companies is working on a different approach to distributed architecture. They are building electronics that are embedded in the modules to run the maximizing algorithms, and then relying on a central inverter to do the DC to AC conversion. Like the microinverters, this has the benefit of maximizing output on a panel-by-panel basis and avoiding the problem of one underperforming panel bringing down the output of its string in an array.

One startup working on this other approach to distributed architecture is Israel’s SolarEdge. The company has raised about $35 million in venture capital to develop its PowerBox technology, a chipset that is attached to each panel that the company says will increase the amount of power harvested by between 5 and 20 percent. In May, the company announced agreements with BP Solar and SCHOTT Solar to explore the commercialization of embedding the PowerBox technology directly into the companies’ solar modules, and SolarEdge is negotiating deals with unnamed solar installers in Europe and the United States.

The chipsets also send signals about each panel’s performance to a web portal, and CEO Guy Sella said the company plans to sell the system at between US $0.30 and $0.60 US per watt, depending on the application, or about the same price as current central inverters on the market today.

PowerBox should be in mass production by the end of the summer this year. Sella said SolarEdge’s design will be more robust than microinverters because many of them still rely on components such as electrolytic capacitors that are known to have shorter life expectancies than the typical 25-year warranty of solar panels.

But it’s not just startups that have been working on new distributed architectures. Last month, chip-maker National Semiconductor announced that it had started shipping its SolarMagic power optimizers, chipsets attached to each panel that perform the maximizing algorithms. The Santa Clara, CA-based company also announced a deal with panel maker Suntech Power that could lead to the company promoting SolarMagic.

Genevieve Vansteeg, a spokesperson for National, said the company has been building energy efficiency and power management tools for handsets and other applications for years and the jump into the solar market was a “logical extension.” But SolarMagic doesn’t have a monitoring function, and Vansteeg wouldn’t say if the company intended to add that feature.

While each company developing distributed architectures believes it has the best solution, GTM’s Wesoff said he could envision each company scratching out a market for itself. He said at this point it’s too early to tell if one architecture will be better than the others. “It could end up that the system installers pick the companies that they have grown familiar with,” he said. If that turns out to be true, then distribution deals with solar installers and module makers will be especially important for companies to gain market traction.