Plenty of kids in the 1960s dreamt of becoming astronauts. Terry Murphy was drawn instead toward launching spaceships into orbit.

“I was absolutely intrigued about rocket propulsion,” Murphy says. “I was launching rockets when I was in grade school.” 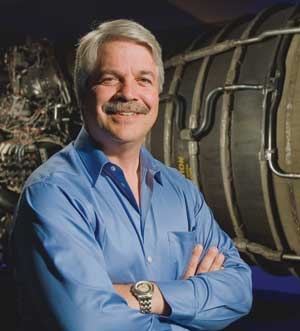 Murphy studied rocket propulsion at Purdue University then headed west to work for Rockeydyne. The company made (and still makes, as a unit of United Technologies) liquid fueled rocket engines.

Is it a match? Well, consider this: An astronaut traveling on the Space Station sees 16 “days” every 24 hours as the vehicle completes a full Earth orbit every 90 minutes. That means the space vehicle’s power system sees daylight then darkness every 45 minutes. The Space Station’s onboard power system tracks the sun, manages consumption and stores energy, all while assuring 100 percent reliability.

“You can’t let the lights go out on the Space Station,” Murphy says. A power failure doesn’t just turn off the lights. It also shuts down the oxygen supply and other critical life-sustaining systems.

The challenge of building a reliable, sustainable and entirely renewable energy source for space exploration translates well to earth-based renewable energy goals. And it was here that Rocketdyne saw a market opportunity.

In the early 1990s, Rocketdyne, the Department of Energy and a group of California utilities built and operated a direct steam system using the sun as its energy source. The idea was based on the same kind of concentrated solar energy most kids play with using magnifying glasses. But instead of a single magnifyng glass, an array of over 1 million square meters of mirrors focused solar energy on a receiver atop a tall tower.

Known as Solar One, this early power tower proved troublesome. For one thing, engineers learned that in trying to make steam in a system fueled by an intermittent resource like the sun, it’s difficult to hold constant temperatures.

Rocketdyne engineers called on experts from a sister business, Atomics International, for help with liquid metal reactors. The engineers decided the best heat transport for a solar tower would be molten salt. “In layman’s terms it’s equivalent to fertilizer,” Murphy says. Focusing the equivalent of 1,000 suns onto a bag of fertilizer melts it. Once melted, the sodium and potassium nitrate holds thermal energy for a long time.

That improvement led to Solar Two, a 10 MW plant that formed the basis for a more commercially viable renewable energy system.

And it’s also where rocket science meets energy production. Murphy says that almost every bit of a rocket engine is regeneratively cooled. In the Space Shuttle main engine, for example, propellant tanks hold hydrogen and oxygen both cooled to -400 F. Mixing the two results in combustion gases that reach 6,000 F with pressures above 3,000 psi. The engine pumps 1,000 pounds per second of superheated steam as it sends a spaceship into orbit.

The power tower operates with similar high heat fluxes and power densities, but keeps the heat on the outside, Murphy says. And rather than use hydrogen for cooling, molten salt is heated to more than 1,000 F. The solar tower includes a heat exchanger made of hundreds of tubes, each carrying molten salt whose temperature essentially matches inlet conditions at a conventional coal-fired power plant.

Seeing the potential for a power system, Rocketdyne 18 months ago licensed its solar power tower technology to SolarReserve, a startup company formed by US Renewables Group, the renewable energy private equity firm. Last September, SolarReserve closed a second round of funding for $140 million. Murphy signed on as SolarReserve’s president and is joined on the company’s management team by Kevin Smith, CEO; William R. Gould Jr.; CTO; and Lee Bailey, Chairman.

Murphy says SolarReserve’s goal is to generate electricity using turbines similar to a coal-fired power plant, but using the sun’s energy and molten salt storage to fuel the steam cycle. “We’re just making heat,” Murphy says. One advantage to molten salt is you can put energy in one day and come back the next and measure less than a 1 percent thermal loss.

Murphy says a solar power tower built in the American southwest could dispatch about 500 MWh annually. A 200 MW facility could have a cap ex roughly between $3,000 to $4,000 a kW, installed. That equates to an overall project investment of $600 to $700 million.

The biggest opportunity to cut cost could come from the heliostats. SolarReserve’s current design has about 17,000 mirrors arranged in a circular pattern around the tower. Mass-producing them could help lower project cost. An equal effort lies in efforts to reduce levelized energy costs to keep cap ex in line while improving operations.

Murphy’s early fascination with model rockets hasn’t diminished. But does he still have time to fly them? “You know,” he says, “I do. I still get to play with rockets every now and then.”