More
Home Solar The Interconnection Nightmare in Hawaii and Why It Matters to the US...

Since January 1, 2011, Hawaii’s three investor-owned utilities interconnected more than 250 MW of solar PV (almost two-thirds residential) to grids with aggregate peak loads around 1,500 MW. This boom ended five months ago when Hawaiian Electric Company (HECO) abruptly stopped approving residential net metering (NEM) applications for most communities on the island of Oahu. HECO claimed the grid was over-saturated with solar and that further study and infrastructure upgrades were needed to restart the interconnection process. The sudden shift left thousands of consumers stranded in “solar limbo” and caused large-scale lay-offs. Yet for all the media attention the ongoing fiasco has received, its primary lessons remain poorly understood. 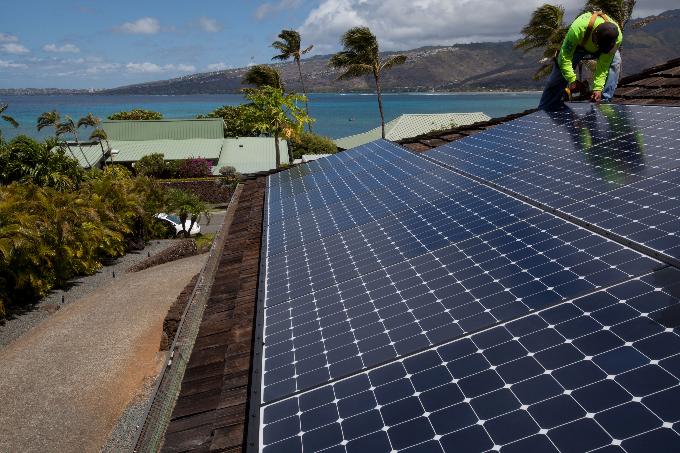 Paradoxically, the changes that caused the current crisis appear, on paper, to expand interconnection opportunities. To understand how this is possible, we need to go back to September 6th of 2013 when HECO sent PV contractors an email announcing the immediate implementation of the following interconnection policy changes:

(1)  Caps Increased. Circuit level distributed generation (DG) penetration caps increased (a) from 75 percent to 100 percent of daytime minimum load (DML) for under 10 kW NEM systems and (b) from 50 percent to 100 percent of DML for systems between 10 and 100 kW. (Please note, percentages are total DG nameplate capacity on a distribution feeder divided by minimum load served by the utility on that feeder between 9:00 AM and 5:00 PM. To correct for the DG’s impact on observed minimum load 75 percent of the numerator is added to this number.)

The switch from post to pre-installation notification was extremely disruptive for active projects, which had started the installation process relying on one set of rules and now faced interconnection under different set of rules. HECO offered no specific guidance on how work in progress would be affected – only vague assurances that existing projects would not be penalized.  Sales to new customers dropped precipitously, because consumers suddenly faced the prospect of lengthy utility review delays and unpredictable utility connection fees, even though their neighbors and friends had connected easily without additional charges. Switching to pre-notification also swamped HECO’s NEM department by flooding its offices with three-months-worth of NEM applications in just a few days.

As the public outcry grew, state legislators summoned senior HECO executives to the state capitol to explain their actions.  The hearing ended with Representative Chris Lee, Chair of the House Energy and Environmental Protection Committee, expressing his concern that HECO might need a state bailout as a result of its unwillingness to meet the challenges of a twenty-first century electric utility.

The Legislature then instructed HECO to work with stakeholders in the solar industry to establish a grandfathering system that fairly treated NEM applicants who had begun their process before the policy change. This group’s solution ultimately resulted in most of these applicants receiving permission to interconnect, and the remainder receiving guarantees that they will eventually be interconnected without additional cost.

The Ongoing Issue is Circuit Penetration

Although the fate of applicants caught in the transition is important, of greater concern is how the sudden crisis occurred in the first place.  The first part of the answer lies in the fact that roughly one-third of HECO’s residential circuits were already above the new 100% DML on September 6th. This number has since grown to about half, and includes much of the buildable residential market. In effect then, the key policy change that took major swaths of the PV market offline was simply HECO’s implementation of the new practice of checking penetration levels when customers proposed projects less than 10 kW.

Given the severe impact on the solar industry and public, the next question is why HECO so urgently imposed its new policy on circuits with solar DG penetration “above 100 percent of DML.” Utilities encourage the public to assume that “being at 100%” indicates that the circuit is “full” and cannot handle additional DG. But this characterization is misleading at best.  The 100 percent DML number is nothing more than a flawed proxy for the possibility that generation may exceed load between the hours of 9:00 a.m. and 5:00 p.m. This cannot actually happen unless generation reaches its peak at the same time load reaches its minimum. When the cycles of peak solar electricity generation and peak customer usage are evaluated, generation on the vast majority of feeders “above 100%” never exceeds load.

Further, even if DG solar generation does sometimes exceed load, it does not automatically follow that the circuit is full and unable to accept more PV without upgrades. Utilities often cite their concern that too much DG may cause reverse power flow at the substations. And yet several of HECO’s substations already experience reverse power flow as a result of distributed generating resources without ill effects.

So, if reverse power flow is not inherently problematic, what technical concerns might justify the use of the 100% DML standard? The only concrete concern identified by the Hawaii experience is the potential for transient overvoltage on the feeder – essentially a short duration voltage spike. In order for this to occur, however, generation on a feeder must exceed load at the precise time the utility seeks to isolate that feeder from the grid. That is, transient overvoltage arises only in the improbable event that a utility breaker is opened while generation exceeds load on a feeder.

Although this scenario is anomalous, it cannot be ignored. Nonetheless, only a quick evaluation is needed to establish that this concern is not justified with solar DG, because the majority of today’s inverters trip before any voltage spike can occur. The utility can fully mitigate this small risk by requiring the installation of proper equipment.  Accordingly, the entire chain of reasoning that begins with alleged technical concerns about DG penetration exceeding 100% DML and then attempts to link itself to concerns about reverse power flow and voltage spikes, falls completely apart.   The current levels of solar DG penetration appear to be fully compatible with Hawaii’s electric grid thanks to the technology already installed as components of the DG systems themselves.

Where Are We Now?

None of this means that high DG penetration is incapable of causing safety or reliability challenges for utilities or their customers. However, it is wholly inaccurate to claim that Hawaii has “reached the limit” or that a DG share “above 100 percent DML” spells the end of interconnections on that circuit. In Hawaii, the hasty imposition of this standard has already resulted in tens if not hundreds of millions of dollars in lost construction activity, layoffs on a massive scale – a more than 50 percent reduction in employment in the sector on Oahu by my estimation — and the denial of relief to customers struggling with electric bills that commonly reach $350 per month.

Hawaii’s experience with high penetration repeatedly reveals that the grid can handle much more DG than previously thought.  Reaching this point has been painstaking and the insights developed have by no means been fully incorporated in to the regulatory process around DG interconnection. However, it is fair to say that based on Hawaii’s experience, there is virtually nowhere else in the U.S. that currently has any justifiable technical concern about the level of DG penetration.