More
Home Blogs The Integration of Sun with Structure

For at least two decades, architects and designers have tried to imagine making solar energy receivers disappear into the very fabric of a structure.

Building-Integrated Photovoltaics: An Emerging Market, from Greentech Media Research, heralds the emergence of Building Integrted Photovoltaic (BIPV) technology, after years of promise, as a real player in the solar marketplace. The dream of architecturally and aesthetically appealing solar energy, it finds, is about to be become a reality.

No longer does the generation of electricity from solar energy require rooftop-mounted panels. The newest materials can be incorporated into the building envelope, replace structural materials like roofing shingles, serve functional or decorative ends like curtain walls, and thereby reduce construction costs by combining the services of shelter and energy generation.

This unique dual potential explains the U.S. Department of Energy (DOE) estimate that BIPV could eventually meet half of U.S. electricity needs. ::continue::

New lightweight, flexible, multicolored, partially transparent and versatile materials from cutting edge manufacturers (Dyesol, Schott Solar, Scheuten Solar, Sunpower, Suntech, Applied Solar, Dow, Saint-Gobain, Lumeta) can be integrated seamlessly into structures in striking ways – on roofs and skylights as well as in facades and windows – that not only don’t detract from a building’s aesthetic quality but actually enhances it.

The report sets out a very literal definition of BIPV: Photovoltaic technology incorporated into the skin of the structure and nothing less. Such a definition requires all the players (architect, designer, engineer, owner, utility) to come together from inception on to truly build in solar power. 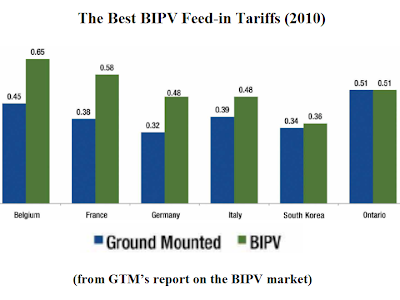 In light of this definition, it is surely no coincidence that many of the nations with the best incentives for BIPV solar energy systems – Belgium, France, Germany, Italy – are nations with great architectural traditions. But to fully emerge, the study reports, BIPV needs more than advanced incentives. Going forward, BIPV will require responses on a spectrum of needs from its supply chain, its manufacturers, its regulators, its designers and its industry as a whole.

As these needs are met – driven by the greater need for New Energy and Energy Efficient buildings, by the intuitive appeal of the concept, and by the effectiveness of FiTs and other incentives – BIPV will, according to the GTM study, leave its niche-market status behind to achieve economies of scale and become an undeniable force in the solar sector.

The BIPV market dropped in 2009 with the downturns in overall economy and, especially, the construction industry. The solar industry returned to a continued emphasis on building-added photovoltaics (BAPV), the standard rooftop and ground-mounted panels.

Heralding BIPV’s global breakout is the July 2010 opening of the Hongqiao Rail Station in Shanghai, China, the world’s biggest stand alone BIPV structure to date, a 6.68 megawatt undertaking and an architectural feast. 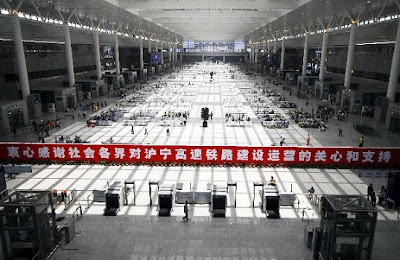