The decrease in the cost of photovoltaic modules has created a boom in the market, which paved the way for rapid construction of PV systems for residential and commercial customers in the United States and the rest of the world. The Solar Energy Industries Association reported that for Q1 2013, residential and some non-residential projects in California have achieved ‘retail rate parity’.

For the owners of these installations, it is important to ensure that they can capture as much of the sun’s energy as possible. In desert conditions and locations close to open land, exposure to the environment creates dust and pollen depositions on the PV panels that degrade the efficiency and energy production of solar systems. Infrequent rain precipitation prolongs this undesirable condition.

PV modules produce the most energy when regularly cleaned. The economic impact of dirty PV modules could be particularly significant during the summer season of peak production capability.

Meaningful improvements in the PV performance at four sites were recently noticed after modules washing. The table below shows increased measured efficiency varying from 9 percent to 26 percent. These improvements would be the same for commercial or residential projects. The right column quantifies how much money would be left on the table for not washing the systems. These values represent production and cost of electricity of $0.15/kWh in Los Angeles, in 2013.

The figures below show performance improvements in two of the four sites after washing the modules. All four cases experienced similar results. The green curve is the estimated expected production. The blue curve is actual production. And, the red line represents the improvement in performance. This is based on information from each system’s data monitor. You can easily identify the time when each system was washed and its performance reached a new production ‘plateau’. You can see how the performance increased over two non-consecutive days of washing at the larger 330-kW site. 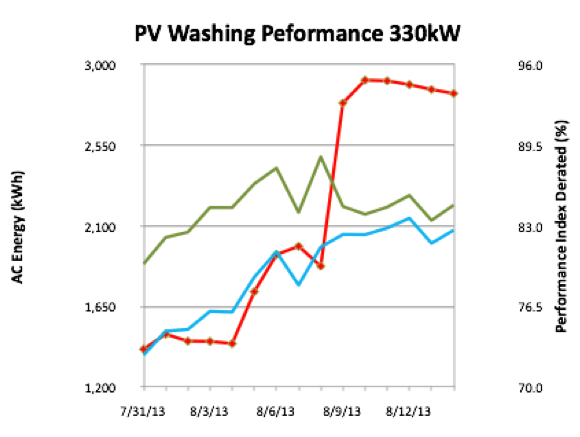 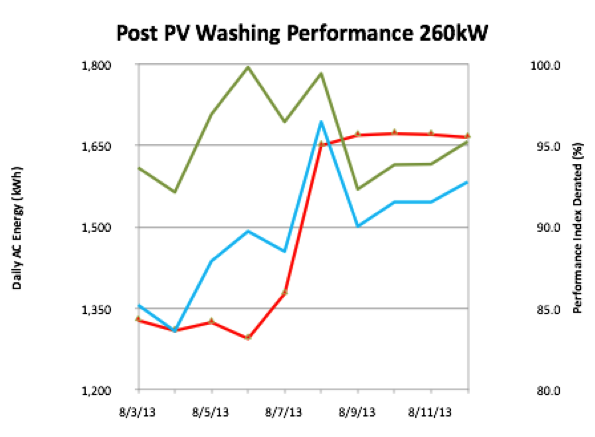 If you acquired the PV system through a Power Purchase Agreement (PPA), you may be asking yourself if you should wash the modules or not. Owners need to closely look at the PPA and see if there are any clauses for PV system cleaning. Some agreements include a one time per year wash by the vendor for the first years of ownership.

If you acquired your solar system under a PPA, the vendor may have included a Performance Guarantee which ensures a minimum energy production is met by the equipment. In this case, if performance falls below this minimum, the vendor must pay you the difference between the actual lower production and the guaranteed minimum.

In general, the guaranteed minimum production is about 85 percent of the annual expected production for your system size and location. If you installed a solar system, chances are that you intended to offset the high cost of electricity in your area with the production of your solar array. In this case,  the remaining 15 percent production between the minimum guarantee and the expected production could represent a significant amount of money. If your system is net metered, any kWh that is not produced due to soiling, even above the minimum performance guarantee, is energy that you cannot take credit for on your bill.

The frequency of the wash should depend on the location and weather conditions.  Owners with a system monitor should devise a program for regularly cleaning the modules when performance starts to noticeably degrade. Otherwise, performance should be closely tracked on a monthly basis against the system’s expected production. In general, washing the modules two to three times a year should be sufficient to make it worthwhile. Beyond this, in locations  where the price of water is high, the cost of cleaning may not sufficiently offset the intended benefit of the wash.

As with any electric powered system and due to the challenging access of some systems, owners need to take serious precautions when cleaning the modules.