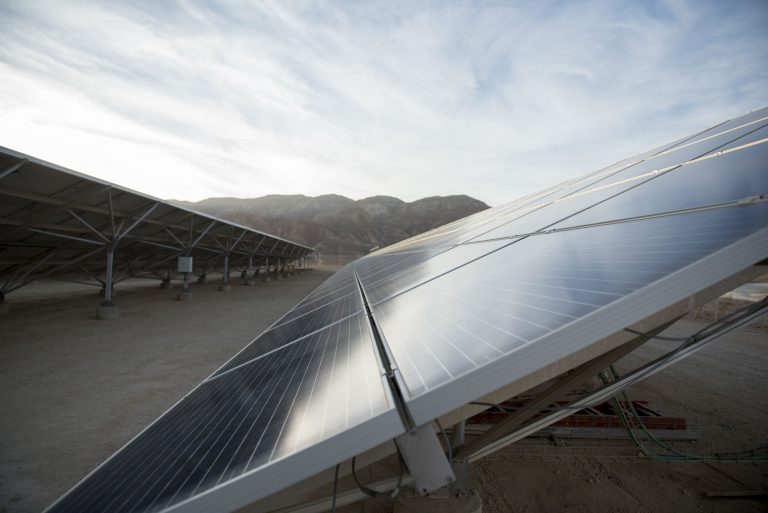 What would a world powered by clean, low-water energy look like? If you visit Israel’s southern region, you don’t have to imagine.

In 2011, Arava Power in the southern Israeli desert launched a 4.9 MW solar field (enough to power more than 3,000 U.S. homes). Since then nearly 200 times as much capacity — both fields and rooftops — has been installed in the region. By 2025, it’s likely solar will provide 100 percent of daytime electricity, plus excess, along the border with Jordan.

With solar technology more advanced and cheaper than ever, solar power can take off quickly in Texas, as it has in Israel.

The Arava Desert, where many of Israel’s solar fields are located, averages about 360 days of sunshine per year. Austin, where I live, averages about 300 days per year, and it’s not even as sunny as West Texas. But in January 2016, solar provided just 0.4 percent of power across the vast majority of the state. There is huge opportunity for solar growth in Texas.

A renewable energy testbed of sorts, researchers at the Eilat Eilot Renewable Energy Initiative in the middle of the Arava are developing roads that wirelessly charge electric city buses, drones to clean the dust off desert solar panels, and electric scooters for commuting that can be plugged into any outlet.

This hub of activity has grown around Israel’s burgeoning solar industry, drawing innovators and building a community as a result. Just a few years ago, solar energy was practically non-existent there. Now nearly 20,000 panels provide 70 percent of the daytime electricity from the Dead Sea to Eilat, a port and resort city in southern Israel.

Further, the Ashalim project in the Negev Desert will next year complete four fields using different solar technologies, including one that will store solar power for nighttime use. The project aims to provide 1.6 percent of Israel’s power, more than half of the country’s current renewable generation. This will help the country reach its 10 percent renewable energy by 2020 goal, a giant step up from its current 2.5 percent.

Texas, like Israel, is ripe with solar potential, especially in the dry, hot west. Plus, we have no shortage of innovators, like in tech-hub Austin and oil and gas-capital Houston. By embracing our sunny days and prioritizing solar development, it’s easy to envision building innovative communities around solar development, while creating jobs, boosting the economy, and saving water.

Beyond requiring virtually no water to create energy (unlike traditional fossil fuels), new solar jobs and income are a boon to the economy.

Typically reliant on dates, dairy farming, and tourism, southern Israeli communities like the Eilat Eilot Institute support a range of jobs, from solar development to implementation to maintenance. In fact, according to the institute’s director, schools, cafes, and other amenities are being built to serve the growing community.

It’s not hard to imagine that type of job hub here. According to the Solar Foundation’s recently-released census, Texas is now home to the third-highest number of solar jobs. The Lone Star State’s solar job market also saw an impressive 34 percent growth in 2016.

In 2009, Israel discovered natural gas reserves, shifting some of the earlier focus on solar development toward natural gas. Texas also has vast natural gas resources, but it doesn’t have to be an either-or situation. If we have both solar and gas potential, shouldn’t we maximize both?

The gas industry could be working hand in hand with the solar industry — together, as the new energy industry — to increase energy independence and security. For instance, in an ideal scenario, all of Israel could be powered by homegrown resources — solar in the day and gas at night. Texas can use a balance of solar, wind, and natural gas, rather than coal imported from other states, to meet everyone’s power needs.

To activate the solar revolution, the bureaucratic hoops to jump through in Israel were immense. The Arava Power Company had to work through 24 different government offices, win about 100 political, regulatory, and statutory battles, and prove the concept with facts on the ground. Yet much of the work has already been done to clear the way for solar in Texas. We already have some proof of concept and fewer levels of bureaucracy, but there is still resistance.

So, what is holding the Lone Star State back? It often boils down to politics. The sun doesn’t care which party you belong to, and it’s available across much of Texas, just waiting for us to tap its power. Plus, the majority of Texas voters from both sides of the aisle support increasing the use of clean energy. Solar also doesn’t need water to create electricity and, with an ever-expanding population, saving water in Texas should be in the interest of all policymakers.

The director of the Eilat Eilot center told me, “The sun is not lazy here. She shows up to work every day.” Texas should put politics aside and take advantage of this tireless worker, creating more jobs and growing the economy.

The latest Texas solar job numbers cited above are a solid start, but California’s solar industry has more than 10 times as many jobs, even though Texas’ solar potential outshines California’s by a margin of four to one. Texas has always been the U.S. leader in energy production. Isn’t it past time that we get our heads in the new solar market game?