At Tigercomm, we are big believers in the power of a compelling narrative. Recently, I ran across several articles that tell a powerful story of clean energy poised to overturn the traditional market for electricity.

First, check out Zachary Shahan’s piece, “This solar graph is so wicked it’s titled ‘Welcome to the Terrordome.'” As you can see in the graph, created by AllianceBernstein’s Michael Parker and Flora Chang, the cost of solar power isn’t just falling off a cliff in absolute terms, it’s doing so relative to fossil fuels. The implications of this graph are extraordinary. As Business Insider puts it, the “almost violent decline in solar pricing” means that “It’s now a question of how and where, not if, solar becomes a dominant force in energy markets.” 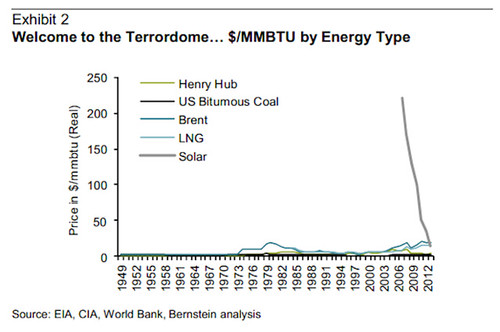 And that is exactly what’s happening. The second article that jumped out at me, “Renewables = 92.1% of new US electricity capacity so far in 2014.” The exciting thing is that this high level of renewable energy penetration is not a fluke. Instead it’s the start of trend that will continue for many years and decades to come. It’s astounding how quickly this change has come about. Consider: if you had forecast such a steep price decline and massive surge in renewable penetration just a few years ago, a lot of people – including leading energy analysts – would most likely have laughed at you. Not anymore.

A few other recent articles help convey the significance of plummeting clean energy prices. For instance, Paul Krugman writes in “Salvation Gets Cheap” that “‘decarbonizing’ electricity generation” is now “a realistic goal.” Meanwhile, The Telegraph makes the case that “Global solar dominance in sight as science trumps fossil fuels.” And Greentech Media looks seriously at the mind-boggling question, “Are We Halfway to Market Dominance for Solar?“

All these articles point in the same direction – that the inevitable transition from fossil fuels to clean energy is now very close to a crucial tipping point.

What makes the “Terrordome” graph so impressive is that the numbers would look even better for clean energy if fossil fuels weren’t allowed to pollute the air and water without paying the full costs of the damage to human health and the environment they create. And, the graph would look even better still if it corrected for the massive market distortions caused by the hundreds of billions of dollars in subsidies provided to fossil fuels over the years in the U.S. alone.

Even without considering environmental “externalities,” things are looking great for clean energy these days as its cost plummets and its market penetration skyrockets. Meanwhile, the fossil fuel industry is fighting an increasingly desperate rear-guard action — funding climate science denial, working to gut renewable portfolio standards (RPS), and trying desperately to head off the distributed energy revolution.

One of the main fossil fuel industry targets in this fight has been state net metering standards, which none other than the Koch brothers have zeroed in on recently. This policy, as the Los Angeles Times explains, “guarantees homeowners or businesses with solar panels on their roofs the right to sell any excess electricity back into the power grid at attractive rates,” forming a “linchpin of the solar-energy business model” in the market for rooftop solar.

Enter the fossil fuel monopolies: “In Arizona, a major utility and a tangle of secret donors and operatives with ties to ALEC and the Kochs invested millions to persuade state regulators to impose a monthly fee of $50 to $100 on net-metering customers.”  The end result was mixed, with Arizona keeping its net metering policy and levying a far smaller charge than Arizona Public Service, ALEC and the Koch brothers had wanted.

The good news is that the fossil fuel industry appears to be losing its fight against policies that help encourage the growth of clean energy. A recent Washington Post article put it bluntly:  “A battle is looming over renewable energy, and fossil fuel interests are losing.”

Why they’re losing was discussed in depth at a recent ACORE panel, where the emphasis was on the resiliency of state clean energy policies and the political support clean energy is receiving from local, in-state business voices because of the numerous benefits renewable energy brings to state economies. Clean energy’s broad support base has helped protect it against attempts by the Koch brothers and other fossil fuel interests to halt its rapid market penetration. For instance, the Kansas legislature recently defeated an attempt by pro-fossil-fuel groups to weaken that state’s RPS. Victories like the one in Kansas don’t mean the fight is over, of course, or that we can let our guard down, but they’re certainly an encouraging sign.