More
Home Blogs Taking the Internet Off the Grid 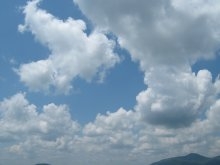 Energy pessimists and fossil fuel optimists love to talk about how much juice our grid needs to run, their point being that solar and other renewable sources could never meet such demand — and demand is only going to grow.

But how valid is that assumption? We know we can reduce the amount of electricity used for lights. We know appliances are becoming more efficient, and we have simple solutions to cut the electricity from unused sockets – all you have to do is buy them.

Ah, say the pessimists, but what about your computers? Even when you get a laptop it’s still usually plugged into a wall or has to be recharged every few hours. And then there are all those huge enterprise server farms to contend with.

Well, the two biggest trends in computing are tablets and clouds, and they are all about reducing that load.

Tablets and smartphones are built around power-sipping. They’re designed to stay off the grid as long as possible, which means they could become solar powered.

Intel’s recent demonstration of that was sort of phony. It’s a defensive move, because they’re being heavily pressed on the power management front by ARM. But what they want to say is that they’ve heard what the market wants and they want to respond.

When Google revealed its energy use statistics recently, most of the headlines were about how much power the company was using. But the headline Google wanted you to read was that they’ve been carbon neutral for four years – that they’ve been buying renewable power to run their data centers, and concentrating hard on reducing their use of electricity.

Clouds are a hot technology right now because they let companies meet a “rush to the rail” – a huge spike in traffic or a sudden huge problem that must solved – and because they let them consolidate resources. But they also, by their nature, reduce power requirements. Sure, a lot of CIOs don’t think about power when they’re thinking cloud, but when you consolidate server rooms you’re retiring the older stuff – and that’s the stuff that uses the most power.

No, this doesn’t drive power use to zero. But if you have truly wireless clients, using WiFi for communications and solar for power (and when you move server requirements to the cloud) you’re dramatically reducing the load on the grid.

Remember: The cheapest renewable energy is the energy you don’t use.