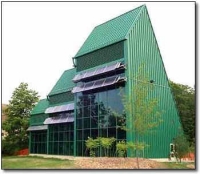 The 2007 CanSIA solar energy conference was held in Toronto, November 19th to the 20th. The conference brought together companies representing solar photovoltaic (PV), solar thermal hot water, solar thermal air, as well as industry consultants, government representatives, not-for-profits, banks and legal firms. This years conference showed the excitement and potential within the solar industry, with over twice as many attendees compared with last year’s event, however it also revealed that there are still some fundamental barriers that are standing in the way of solar becoming mainstream.

Solar PV systems are still too expensive for the general consumer to justify on the basis of payback or return on investments (ROI), and the current Canadian federal government programs intended to spur the market are insufficient. For example, the Class 43.1 Accelerated Capital Cost Allowance aims to provide a tax-based incentive for renewables by allowing accelerated depreciation. Unfortunately, this incentive will not be of any use to homeowners or small businesses that can’t make high capital cost purchase decisions based off of future tax savings. Similarly, the ecoENERGY for Renewable Power program with its offer of 1 cent/kWh is targeted only to businesses and insufficient to create a reasonable payback.

The Ontario Standard Offer program has been hailed by government officials and industry experts alike as an excellent mechanism for spurring the market, however while the funding concept is sound (i.e. paying homeowners for the solar energy that they produce and sell to the electricity grid), the offered price of 42 cents/kWh is not nearly enough to make projects worthwhile. It was suggested that an offer of 80 cents/kWh would be needed to make rooftop PV systems cost efficient, while land based installations could be justified with a guaranteed sales price of 60 cents/kWh.

Here’s how the math works: As a general rule of thumb it costs $10,000 to install 1kW worth of PV on a rooftop in Canada, so a typical 3kW system would cost around $30,000. In most regions in Canada, you could expect a capacity factor of 15% to 18% (to put it another way, over the course of a year the system will produce on average 15% to 18% of it’s maximum rated load due to cloudy skies and night hours). Therefore this 3kW system will produce on average around 4,336 kWh/year.

In Ontario, the regular residential rate for electricity is around 11 cents per kWh, so if a consumer is paying 11 cents/kWh, but earning 42 cents/kWh produced, that household could make $1,344 per year, which would payback the original investment after 22 years – not a great value proposition for most investors! Assuming the standard offer was raised to 80 cents/kWh, then that system would earn the household $2,991 per year and pay for itself in just over 10 years – still not a great financial investment, but at least it would put it in the range acceptable to financing for most banks and lenders.

Other notable barriers to the increased market uptake of solar PV projects discussed at the conference include the lengthy provincial approval process, difficulties with interconnection to the electrical grid, and a lack of standardized financing structures.

On the solar thermal side, the Ontario Minister of Energy announced that the province would match the federal government’s funding for the ecoENERGY for Renewable Heat program, bringing the total funding level for solar thermal air and water technologies to 50% of total project costs in Ontario (although in the rest of Canada it remains at 25%). Other provinces are considering following suit. Once again however, this program is targeted to commercial and institutional buildings only, leaving little options for residential consumers interested in renewable energy.

Given these barriers, the panel speakers recommended that at this time the industry should focus more on shaping public policy than consumer awareness. With the current Conservative minority government in power looking for issues that will gain consensus across all the parties, the speakers felt that it’s a good time to be promoting the many benefits of switching to solar power.

Matthew Sachs (B. Eng., LEED AP) is an energy consultant with the firm Sustainable Ventures Inc (SVI). SVI promotes entrepreneurial success and robust market uptake of clean technologies by delivering effective support to mitigate enterprise and investor risk and optimize business results. Mr. Sachs is based out of Ottawa, Canada, and can be reached at matt@sustainableventuresinc.ca