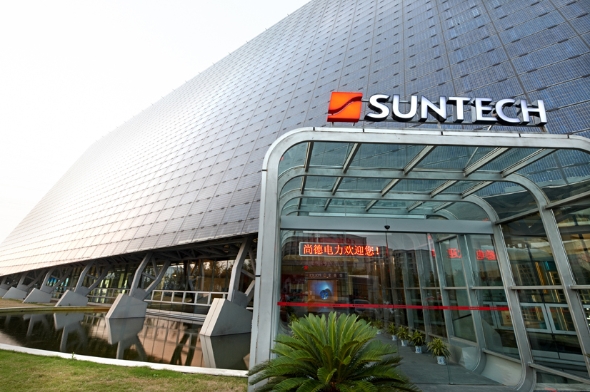 NEW YORK — Suntech Power Holdings Co., the world’s largest solar-panel manufacturer, rose the most in almost a week after temporarily reducing production capacity to lower costs amid a global oversupply.

Suntech gained 6.6 percent to 93 cents an American depositary receipt (ADR) at the close in New York, the most since Sept. 11. Each ADR represents one ordinary share.

Suntech will cut production capacity for solar cells to 1.8 gigawatts, the Wuxi, China-based company said in a statement. The company said it had 2.4 gigawatts of annual capacity in May when it released its first-quarter results. It didn’t say when it believes output would increase again.

The company isn’t reducing its 2.4 gigawatts of solar-panel production capacity, just temporarily closing the cell production portion of it. The majority of the approximately 1,500 employees affected will be offered other jobs and the rest will be fired, according to the statement.

Prices for solar cells dropped 45 percent in the past year as governments in the U.S. and Europe pared back incentives and demand slowed. Suntech faces possible tariffs in Europe, which was the largest market for the products last year, in addition to anti-dumping duties imposed in the U.S.

The cutback isn’t a surprise and more solar manufacturers will probably follow suit, said Alex Morris, a research associate at Raymond James & Associates Inc. in Houston. “Oversupply has sent prices cratering and margins as well. Right now this is just scratching the surface of that overcapacity.”

“With these and other initiatives we target to create a sustainable business model and return to positive operating cash flow in 2013,” he said.