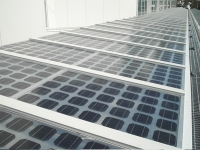 Arizona, United States The Chinese solar PV manufacturer Suntech opened a new 30-MW capacity module production facility in Arizona today. Although a lot of solar manufacturers have moved over to China in recent years, this move shows that foreign companies see the value in setting up shop in the U.S.

With some markets in Europe declining, the U.S. is expected to make up for some of the slumping global demand. The American PV market could break the 1GW barrier for the first time in 2011.

Many companies have also moved into the U.S. so they can produce modules that are complaint with American-made requirements under the American Recovery and Reinvestment Act.

The 117,000 square foot facility will be used to produce Suntech’s 280 watt Vd-series modules that are used mostly for commercial and utility-scale projects. Suntech says it will expand the facility by 50 MW next year, growing the staff from 75 people to 150. The company plans to eventually grow the facility to 120 MW.