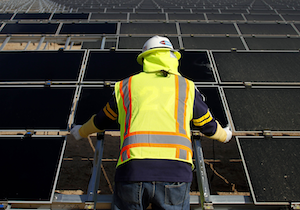 SunPower Corp. is following through with a planned restructuring effort that will reduce its workforce by 25 percent to cut costs after solar prices plunged in an oversupplied market.

The second-biggest U.S. panel-maker will cut 2,500 employees to reduce operating expenses next year to less than $350 million, the San Jose, California-based company said in a statement Wednesday. It’s closing a factory in the Philippines that can produce about 700 MW a year.

The restructuring effort comes as increased panel production worldwide floods the industry, driving down prices 31 percent this year. With demand expected to decline in 2017 in China, the world’s biggest solar market, global installations are expected to increase at their slowest pace in at least a decade. That prompted Chief Executive Officer Tom Werner to close SunPower’s high-cost Fab 2 facility in the Philippines, to improve margins.

“It was our first large-scale cell processing facility,” Werner said on a conference call Wednesday. “It was older equipment and higher-cost.”

The company announced last month that it was developing a restructuring plan, after reporting its fifth consecutive quarterly loss. SunPower rose 14 percent to $7.95 at the close in New York. The shares have declined 74 percent this year.

The moves will result in restructuring charges of at least $150 million this quarter, and $75 million to $125 million next year. The effort is expected to leave the company with about $300 million in cash at the end of next year.

SunPower isn’t the only manufacturer to idle factories after module prices sank. First Solar Inc., the largest U.S. panel maker, last month said it will eliminate 1,600 jobs and shipments will shrink to as little as 2.4 GW of panels next year, down from its forecast of as much as 2.9 GW this year.