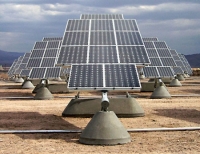 Colorado, United States — SunPower said this week that it’s going to design, build and supply panels for a 30-MW PV project in Colorado. The project, called the San Luis Valley Solar Ranch, will begin construction this year. If all goes as planned, the plant will be fully operational by 2011.

The plant will use SunPower’s 19-percent efficient E19 solar panels and tracker system, which generates up to 25-percent more energy per land area than conventional systems, said the company. Iberdrola Renewables is developing the solar ranch, and will own and operate it. The company will sell the electricity under a long term contract to Xcel Energy, for distribution on the region’s utility grid.

This 30-MW PV project is one of many large-scale plants announced in North America this year. Just a few years ago the largest PV plant in the world was 18 MW. Now it’s common to see projects in the 10-30 MW range. In the beginning of October, Enbridge and First Solar announced the completion of an 80-MW plant, the largest in the world. Shortly after, Enbridge and First Solar said they would build a 150-MW project in Arizona.

SunPower has more than 600 megawatts of large solar power systems installed or in the pipeline around the world. Below is a video of SunPower’s 14-MW installation at the Nellis Air Force base. When completed in 2007, it was one of the largest in North America. It’s hard to believe that it’s considered small compared to the recent round of project announcements.